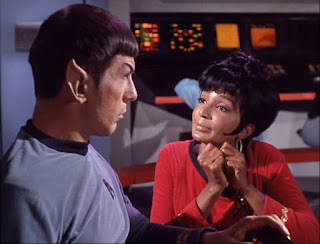 It is 8 September 1966, exactly 50 years ago, and time for the first-ever episode of Star Trek.

The Enterprise travels to the long-dead planet of M-113 to deliver supplies to the archaeologist Robert Crater (Alfred Ryder) and his wife Nancy (Jeanne Bal) - who is a former lover of Dr McCoy (DeForest Kelley). When a string of Enterprise crew members die, the salt drained from their bodies, it becomes clear that there is something else living on M-113.

"The Man Trap" was the fifth episode of Star Trek to be filmed, but the first-ever to be broadcast. In the fashion of 1960s television drama it does not act as an 'opening episode' in any real fashion: the Enterprise is already well into its five-year mission, and we meet the regular characters purely through the undertaking their day-to-day duties onboard the ship. It is a fairly mediocre episode, all things considered, but it does contain the elements and the characters that will go on to make Star Trek a 50 year-old hugely successful television and film franchise. Everything has to start somewhere, after all.

It is pretty clear why CBS selected "The Man Trap" to launch their new prime-time science fiction series: it has a fairly hokey monster-of-the-week premise, and a very low-brow pulp sensibility. Nancy Crater is dead, of course, and her place taken by a shape-shifting hairy monster with a penchant for salt. This enables the episode to not only feature a climax with Captain Kirk (William Shatner) wrestling with a hideous monster, but also early scenes of Nancy looking completely different to Kirk, McCoy and a junior Enterprise officer and ultimately tempting that officer away with her sexual attractiveness (and then murderously draining him of salt).

The thing is, despite the lurid premise the episode is already seeded with so much of Star Trek's DNA that it can't help but find occasional intellectual moments. There is an attempt to rationalise what sort of alien creature it is, rather than simply dismiss it as a monster. At the episode's end Kirk even gets to speculate that the salt monster was not actually evil, just a hungry predator following a natural instinct.

There are some great moments of character in the episode as well. A bored Uhura (Nichelle Nichols) tries to flirt with Spock (Leonard Nimoy) on the Enterprise bridge. Kirk teases McCoy about his past relationship with Nancy Crater, not to mention her playful nickname for him. Perhaps most striking among the characters is Professor Crater, who knows the truth regarding the creature masquerading as his wife but despite it having killed her some time ago cannot bring himself to kill it in return. He is a scientist. It is presumably the last of its kind. Despite his pain he remains unwilling to commit genocide. It's a much more complex and disturbing attitude than viewers generally saw in 1966 television.

In terms of production the episode is remarkably bright and colourful, particularly now that the whole series has been remastered in high definition for the bluray and streaming markets. As I noted above, the episode itself is fairly ordinary. The quality of the series it launched is already well evident, even 50 years later.

So it's happy birthday to Star Trek. With a new series (its seventh) launching next January, it seems there is a real chance the franchise will be exploring strange new worlds in another 50 years.
Posted by Grant at 9:05 AM