Star Trek: The Next Generation: "Cause and Effect" 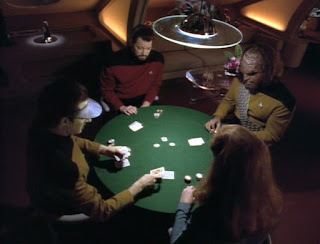 It is 23 March 1992, and time for another episode of Star Trek: The Next Generation.

"Cause and Effect" sees the Enterprise caught in a time loop for an entire episode, with each day inevitably ending with the ship's destruction and the death of its entire crew. The episode is often referred to the Groundhog Day episode of The Next Generation, except that isn't really true apart from the very basic similarity in set-ups. That film was all about Bill Murray knowingly manipulating the same day over and over to try and create the perfect day. "Cause and Effect" is all about the viewer waiting to see how long it takes for the Enterprise crew to even realise the time loop is in effect.

Blowing up the ship and killing the entire crew is certainly one of the series' finest cold opens. In fact it is so aggressive a hook that to an extent the rest of the episode struggles to catch up with it. That's actually a pretty great problem for an episode to have when you think about it; it's certainly better than the alternative.

One really nice touch is that the bulk of the episode is based around Dr Crusher (Gates McFadden), a character who is generally quite poorly served by the series. Here she is pretty much the first person to notice that something is going wrong. At a regular bridge crew poker game she starts predicting the cards before Data draws them. In her quarters she hears whispering voices and actually thinks to research if anybody else on the ship had the same experience. While the technical explanation of what has occurred falls down to the likes of La Forge (LeVar Burton) and Data (Brent Spiner), it is impressive just how much Crusher is allowed to dominate.

The episode employs a special kind of mystery: not one of what is going on, but when the characters are going to realise it for themselves and successfully escape the situation. It can be very satisfying if handled well, which generally speaking the episode does. It also does a fairly strong job of ensuring each repeated iteration of the same day feels fresh and interesting.

After watching the same day play out about five times, "Cause and Effect" concludes on the most bizarre of little rewards. The Enterprise dodges the other starship at last, it turns out to be the long-missing USS Bozeman - trapped in an identical time loop for more than 70 years - and its captain is played by Kelsey Grammer of Cheers and Frasier fame. It is a slightly jarring moment, but at the same time it is also slightly wonderful.

"Cause and Effect" is not a sensational episode, but it takes a simple science fiction idea and plays it in a straightforward and well-plotted fashion. After the less-than-stellar efforts of "Ethics" and "The Outcast", that's a tremendous relief. It leaves Season 5 with 12 good episodes out of 18, and a quality ratio of 67 per cent.
Posted by Grant at 7:34 AM