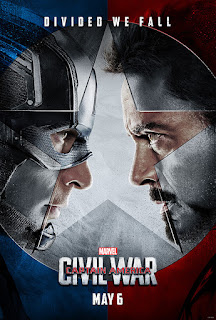 The Avengers have a fatal showdown in Lagos that sees a building severely damaged with civilian casualties. Tired of the rising death toll from superhero incursions, the United Nations spearheads a set of accords to bring the Avengers under government control. When the Winter Soldier (Sebastian Stan) appears to stage a terrorist bombing of a UN summit, killing the king of the African nation of Wakanda, Iron Man (Robert Downey Jr) leads the charge to sign up to the accords and bring him to justice. When Captain America (Chris Evans) refuses to sign, and sets out to apprehend the Winter Soldier - former best friend Bucky Barnes - for himself, the stage is set for a super-heroic 'civil war'.

Or thereabouts. Captain America: Civil War is arguably the most ambitious and complex Marvel Studios picture yet. Ambitious because it pulls in a huge quantity of pre-existing characters while still finding time to introduce a few new ones. Complex because it is a combined sequel to both Captain America: The Winter Soldier and Avengers: Age of Ultron, and failing to see both of those films in advance will likely render half of this film somewhat confusing and nonsensical. It is also complex because of how one reviews it. If you're a Marvel fan, a lot of scenes in here are going to be an absolute delight. If you're simply looking for an entertaining action blockbuster, it's a little more difficult.

There is a real problem at the heart of Marvel Studios' constant barrage of superhero movies - at least, I think there is one for one half of the audience. For the past eight years or so Marvel has pretty much revolutionised how superhero movies get made, and they have done that by aggressively emulating the comic books upon which they are based. There are certain hallmarks of the traditional Marvel comic book: they are serialised, they are continuity-heavy, and they have a large cast of overlapping characters who make guest appearances in each other's movies. That has been stunningly emulated by these films. They may only come out twice a year, but the story lines continue from one release to the next and the characters all cross-pollinate: Hawkeye in Thor, Falcon in Ant-Man, everybody except Thor and the Hulk in Civil War, and so on. So if it's a live-action comic book empire you're looking for, and I suspect the majority of the Marvel Studios audience are looking for exactly that, then Civil War is pretty pitch-perfect.

On the other hand, it's difficult to look at Civil War as a discrete narrative film and reach the same conclusion. It doesn't really have a three-act structure. It begins fairly loosely because it can pre-assume the audience still remembers Age of Ultron from a year ago. It spends its middle section in a string of scenes without a really solid structure. It ends in a very open-ended fashion too, since just as it safely assumed the audience was there for Age of Ultron and The Winter Soldier it can also assume they will be back en masse for Black Panther and Infinity War. Success and long-term storytelling effectively allows the Marvel films to be somewhat lazy. On a personal level I find the Marvel films I enjoy the most are the ones with the least links to the broader franchise: Guardians of the Galaxy, Thor, Iron Man 3 and so on. The continuity heavy efforts like The Avengers and Age of Ultron don't impress me half as much.

Then there's the problem of Captain America himself. He may be the title character of the film, but it isn't really his movie. The inciting incident affects Scarlet Witch (Elizabeth Olsen). Much of the film's middle affects Black Panther (Chadwick Boseman), Black Widow (Scarlett Johannson) and Iron Man. Certainly the climax is a bigger deal for Iron Man and Bucky than it is for the protagonist. To a large extent Steve Rogers coasts through his own movie watching half of it happen to other people. It isn't that he isn't affected or that he lacks agency, it is that the film simply keeps denying it to him when he probably deserves it the most. If this film was titled Avengers: Civil War this wouldn't be an issue, but it isn't: this is Captain America and he's partially lost the control of his own movie.

There is also that hero versus hero issue that dogs every superhero narrative of this kind. It is close to impossible to find a storyline in which two heroes will believably fight each other without making one of those heroes look like an idiot or an horrible person. The comic book Civil War failed, committing a pretty harsh character assassination on Tony Stark as it went. Warner Bros' Batman v Superman failed, and wound up making Superman look petulant and Batman look psychotic. To the credit of writer/directors Joe and Anthony Russo, the movie Civil War almost gets away with it - until they let Tony Stark go freakishly off the rails for the climax. If you're a comic book fan you will probably accept it as a trope of the genre. If you're not, it might be more difficult to swallow.

So which Civil War do you want to see? The Civil War that is a self-contained film is honestly messy as all hell. The Civil War that is the latest in-cinema issue of the self-named Marvel Cinematic Universe is actually pretty great. It is certainly much stronger than Age of Ultron, and while it doesn't hit the heights of The Winter Soldier it is still a hell of a lot of fun. Treat it like a comic book and you will breeze through. Issue #1 is a great set-up. The reveal of Black Panther in issue #2 is brilliant. Everyone's going to talk about the airport fight in issue #4 for years, and while it was a little annoying to see issue #6 get used to basically rework and spin-off all the regular ongoing series it still manages to be a much better miniseries than the actual comic book Civil War.

The best way to enjoy Civil War is to just accept it for what it is and enjoy the moments. Black Panther really does seem great, and I left the film anticipating his own film a lot more than I was. Spider-Man (Tom Holland) is pretty much the first live-action version of the character to actually nail the comic book version. Ant-Man's transformation into Giant-Man is an absolute riot. The action is great, the chases and fist-fights come with a pleasing regularity, and all of the cool Marvel superheroes get to do cool things. Sometimes that really is enough, so long as you're the audience for it. I can't wait for the next issue this October when Doctor Strange comes out.
Posted by Grant at 5:13 PM