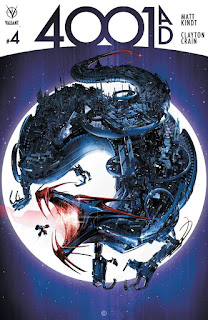 The fate of the Earth hangs in the balance as Rai challenges Father for the future of New Japan. It's the fourth and final issue of Valiant's excellent miniseries 4001 AD, by writer Matt Kindt and artist Clayton Crain.

What is perhaps most surprising about this issue is just how little of it is dedicated to the climax, and correspondingly just how much is devoted to its epilogue. I actually think Kindt has it the right way around. Action is just action: we don't need to see a blow-by-blow account of the climactic battle, but we do need to see what happens to those who survive the final battle of New Japan. What we are left with is something grounded and quite uplifting, and more importantly something that lays the groundwork for future storylines - either in Rai or in new Valiant titles to come.

Clayton Crain's work is mostly exceptional, although there is a small sense that some of the later pages may have been rushed a little. It's all solid work, but for some reason the first half feels visually stronger than the second. Altogether it has been an absolutely gorgeous series, and I strongly recommend people check it out when the collected edition gets published. (4/5)

G. Willow Wilson continues to know it out of the park with Ms Marvel. Not only is this a Civil War II tie-in that actually works, it is precisely the sort of morally trouble teen angst-filled melodrama upon which Marvel built its post-1960s reputation. Alphona and Miyazawa's art continues to be adorable, and the drama features high stakes and personal costs. On one level it's actually rather maddening, since Wilson is ably proving that event tie-ins can work. They can be complementary to the main event, and they can be used to further character arcs at the same time. If she can do it, why can't anybody else? (5/5)

In this new Ninja Turtles comic, a variety of writers and artists tell stories from the expanded universe, all of which fit in continuity with IDW's regular ongoing. A lot of fans will likely be happy with the main storyline, in which April O'Neil attempts to recruit Baxter Stockman to help defend the Earth, while the Turtles chase down a new humanoid scorpion villain. The icing on the cake is the back-up featuring art by Turtles co-creator Kevin Eastman and legendary comics artist Bill Sienciewicz. That's almost worth the cover price alone. (4/5) 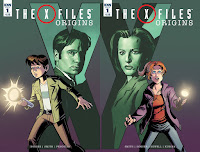 It's the comic that answers the question I'm pretty sure hardly anybody was asking: what were Mulder and Scully like as kids? This special miniseries provides two stories about the X-Files protagonists when they were young, and despite some nice artwork it really does feel like a waste of time. Some spin-off comics get to explore new angles on popular characters. Some simply allow the reader to indulge in typical stories in a different medium. Books like this just feel like they exist to profit from a license. There are much, much better comics to buy that this, including ones published this week by IDW. (2/5)
Posted by Grant at 7:30 AM