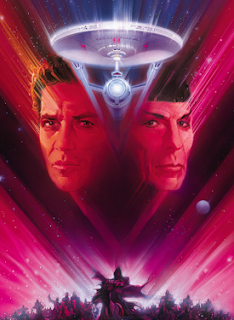 The crew of the newly anointed USS Enterprise-A are dragged out of shore leave when terrorists take hostages on the half-forgotten diplomatic post of Nimbus III. The leader of the terrorists? Sybok (Laurence Luckinbill), Spock's half-brother and a religious zealot who hijacks the Enterprise to reach the centre of the galaxy and meet his god face-to-face. As the Enterprise crew fall one by one under Sybok's spell, the only hope of defeating him lies in Captain Kirk (William Shatner).

I've previously seen Star Trek V referred to as "Shatner's folly". Since co-star Leonard Nimoy was granted permission from Paramount to direct the previous two Star Trek films, it was understandable that William Shatner might put up his hand and demand the same privilege. It is also understandable that, as a creative individual with more than 20 years of experience playing Star Trek's lead character, Shatner might also have some ideas on what kind of story to tell in a fifth feature. The end result is pretty notorious among Star Trek fans, with The Final Frontier regularly cited as the worst Trek film of the set. So dismissively slated is it that I figured, after rewatching the three films before it, it was worth coming back to the film with fresh eyes and seeing just how fair that assessment really is.

The bottom line is that, yes, The Final Frontier is by a fairly hefty margin the worst Star Trek film ever made. It is definitely not the case that you could rephrase that as 'least-best' either; however you approach it this is a bad film. It varies from slightly embarrassing to watch to simply being pretty boring to watch. In isolation its a poor viewing experience. As a follow-up to the charming and immensely successful The Voyage Home it really is a bit of a punch to the guts.

A cursory examination of the circumstances of the film's production actually take a lot of the blame off Shatner's shoulders. Paramount were inflexible on the film's release date, and that meant Industrial Light and Magic - whose visual effects in the 1980s set the industry standard - were unable to fit the film into their schedule. The effects were instead undertaken by a much cheaper independent outfit, whose lower quality left the film looking visually inferior to other Star Trek films that were up to a decade old. Budget cuts also removed the film's climax in its entirety, replaced instead by a much cheaper dialogue-based scene. A Hollywood writer's strike left the film shooting from a script that still needed significant rewrites. Paramount's budget cuts also affected the film in more general ways. A film shot cheaply is, by necessity, a film shot quickly: often scenes used fewer takes, and correspondingly fewer chances for the actors to deliver strong performances. To my eyes the whole production looks visibly rushed, and that has led to oddly weak and exaggerated performances from much of the cast.

Now one could glance at the reported budget of The Final Frontier ($33m), and figure it had plenty of money, since The Voyage Home cost $21 million and The Search for Spock $16 million. The difference is that The Final Frontier was attempting to do a lot more for its money: a story set on three different planets, scenes of starships battling, large-scale action sequences including an outpost under siege and Kirk escaping a small army of rock people (the aforementioned cut climax). Paramount approved the storyline and screenplay, but failed to give that storyline the resources it required to be properly realised.

So as I noted above, it's easy to take most of the blame for the film off Shatner's shoulders. Most. There is still the core problem of the film's actual plot. The idea of a religious zealot hijacking the Enterprise so that he can meet God at the centre of the galaxy is quite a bit bonkers, in all honesty, and any story that tries to tackle religious faith in a science fiction context is going to be walking something of a creative minefield. Deep Space Nine, of course, navigated that territory marvellously. The Final Frontier simply doesn't have the time, nuance or intelligence to do the same. When the characters finally reach the centre, and beam down to the surface of a craggy, desolate planet, the film has set the audience up to see something jaw-dropping. Instead they get an angry shouting head demanding that it be taken aboard the Enteprise in order to conquer the galaxy. Kirk's response - "Why does God need a starship?" - might be a pitch-perfect quip for Captain Kirk, but it's also a merciless puncturing of the entire film's misguided premise.

The film also has an annoying tendency to glorify Kirk while ridiculing the rest of the cast. Whether it's Sulu (George Takei) and Chekov (Walter Koenig) getting lost in the woods, or Uhura (Nichelle Nichols) doing a striptease to distract a bunch of soldiers, or Scotty (James Doohan) undertaking comedic pratfalls on the Enterprise, the end result is a film that demeans beloved characters while over-embracing the star. Some decent material is reserved for McCoy (DeForest Kelley) and Spock (Leonard Nimoy), but even then they feel relatively sidelined compared to the previous sequels.

There are moments that work, but they are fleeting and quickly followed up with moments that fail. The idea of a Vulcan antagonist who has embraced emotion is one with a lot of merit, but it is saddled to the idea of him being Spock's half-brother - which stretches credulity too far. Lawrence Luckinbill does a reasonable job in the role, but it's obvious the part was written (rather ambitiously, I feel) for Sean Connery. Luckinbill really does feel like a cut-rate Connery throughout the entire film.

Thankfully the original series cast rebounded for one final hurrah in 1991's The Undiscovered Country. The Final Frontier is, it has to be said, pretty much exactly the colossal misfire that its detractors claim it to be. There's always going to be a bit of entertainment seeing beloved characters back on the screen, but that entertainment soon turns to dissatisfaction, boredom and possibly even a bit of resentment: how dare they get it all so wrong?
Posted by Grant at 9:11 AM