Star Trek: The Next Generation: "The Perfect Mate" 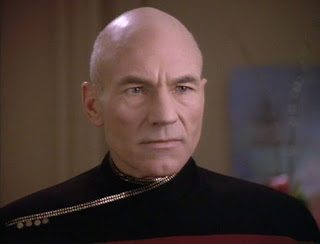 It is 27 April 1992, and time for another episode of Star Trek: The Next Generation.

The neighbouring planets of Krios and Valt Minor are declaring peace after a long period of conflict, with the Enterprise to act as the site for the treaty signing. One ambassador has arrived on the Enterprise already, bringing with him a precious cargo as a gift for his counterpart: a genetically-engineered woman named Kamala (Famke Janssen) whose empathic powers allow her to bond to whatever man to whom she is presented, and to alter her personality to become his perfect romantic partner.

"The Perfect Mate" is a dreadful episode, and there's no point pretending otherwise. For one thing its background is a dreadfully weak peace negotiation between two interchangeable civilizations. For another, the Ferengi turn up in a poorly shoe-horned subplot and get to be treated with active racism by all of the Federation personnel around them. Most importantly, it is an episode that bases its plot around a woman raised into sexual slavery and then has the gall to make a romance about it.

It is patently obvious that a horrifying abuse is taking place here. The script tries to have Kamala defend it: she argues that she was bred this way, and that she enters into the arranged marriage of her own free well, but if she was genetically engineered by others to think that then it really isn't her choice at all. Weirdly the script has Dr Crusher (Gates McFadden) point this out to Captain Picard (Patrick Stewart), and yet he continues to not only allow Kamala to be given away as property but begins to fall in love with her as well. It is also worth noting just how appallingly hetero-normative the episode's treatment of Kamala is. She is reaching sexual maturity, when she will bond with whatever man with whom she spends the most time, and she is exuding huge quantities of pheremones to enchant and attract every man in her reach. She does not seem to attract any women, presumably because there are no lesbians or bisexual women on the Enterprise, and when she requires a chaperone Picard nominates Data as the only person on the ship able to resist her charm - apparently because there are no heterosexual women or homosexual men on the Enterprise either.

Riker (Jonathan Frakes) seems positively risible in this episode, openly flirting and then sharing a passionate kiss with Kamala - only to pull back because 'I make it a policy never to open another man's gift'. This awful patriarchal behaviour extends to Picard, who resists Kamala but ultimately falls for her despite knowing just what an awful and repressive existence she has. The writers room of The Next Generation has been going in a particularly odd direction with Picard this season. Here he's effectively defending sexual slavery. In earlier episodes he has advocated for a depressed Worf to commit suicide, and defended a homophobic practice of medically conditioning sexually diverse aliens. It all seems to stem from an attitude of 'we must not judge, and cannot interfere', but it is leading him to side with an awful lot of fairly odious behaviour this season without any apparent reluctance or upset. Patrick Stewart is working the character to the best of his ability, but all that does is partially mask how repugnant the character has temporarily become.

The episode ends on a tragic note - Kamala has spent too much time with Picard, and has imprinted upon him and not her new husband. She will now spend the rest of her life faking interest in that husband and pretending to share his interests. It feels as if the intent is for us to feel bad for her and Picard, but instead I'm left simply feeling bad.

We're 21 episodes into Season 5, and only 13 have been good. I honestly remember Season 5 being better than this. The quality ratio slips down again, to 62 per cent.
Posted by Grant at 5:18 PM