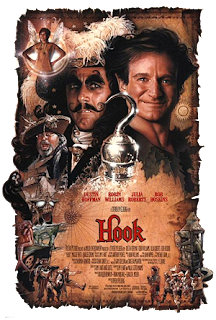 Corporate lawyer Peter Banning (Robin Williams) flies with his family to London for an event honouring Wendy Darling (Maggie Smith), the woman whose orphanage sheltered Peter as a child. When his children are kidnapped Peter learns that he is actually the grown-up Peter Pan, and that they are now prisoners in Neverland of the pirate Captain Hook (Dustin Hoffman).

Hook is a film that was a long time coming; so long, in fact, that by the time it had arrived it was too late to function. Director Steven Spielberg first discussed the idea of a Peter Pan live-action film back in the early 1980s, when he had just directed E.T. the Extra-Terrestrial and was looking for a family film to produce with Walt Disney Pictures. By the time he finally made the film, it had transformed from an adaptation to a sequel, moved from Disney to Tristar Pictures, and Spielberg had directed the likes of The Color Purple and Empire of the Sun. Put simply: he had progressed too far as a filmmaker to comfortably direct an all-ages whimsical fantasy. I think you can see that in the film production, which is handsomely framed and costumed, but narratively a bit weak. You can sense a sort of bored cynicism behind every scene.

People often accuse Spielberg of sentimentality, which is only really a negative if you are someone you doesn't think art has a right to be sentimental. I think there is a warmth to many of Spielberg's films that really inspire a sense of wonder, whether it's Elliott meeting ET, Alan and Ellie seeing dinosaurs for the first time, or the mothership descending at the climax of Close Encounters of the Third Kind. Hook would seem to be ready-built for wonder: there's a fantasy world where people can fly, and where boys get to have swashbuckling sword-fights with pirates. Spielberg taps into that sense of wonder to an extent, but only to an extent. It feels as if a large part of the film's heart never made it on-screen. Too much of the film feels mechanical.

That's certainly the case with Julia Roberts as Tinkerbell the fairy. It is essentially a colossal piece of miscasting, and her portrayal of the character feels relatively weak and largely charisma-free. Certainly it stands in sharp contrast to the other lead actors, where Hook's most entertaining material may be found. Robin Williams, for example, gives a lovely performance as Peter, and brings his excellent comic timing and ability to sell a joke to bear on the whole film. Child actor Charlie Corsmo does a strong job with his son Jack. Corsmo was a great actor around the early 1990s, giving solid performances in What About Bob and Dick Tracy as well. Bob Hoskins is wonderfully funny and likeable as Mr Smee, Hook's right hand man.

It's Hook himself, as played by Dustin Hoffman, that is the film's greatest asset. Hoffman throws himself into the role. It's the best comedic work he has ever done, and in the context of his broader career it is one of the most unusual things he has done. So dedicated was Hoffman to the role that he brought in his own screenwriter to sharpen his dialogue. It's a wonderfully theatrical, over-the-top performance, delivered by an actor that has absolutely nailed exactly why his character is there and how he aught to behave.

It is a very happy and high-spirited film, and despite the slightly unenthused manner in which it has been assembled it remains an awful lot of fun. It's superficial yes, but there are plenty of scenes and moments where it's easy just to smile and go along with the flow. It is all backed by a great musical score by John Williams: so good that I swear he cribbed sections of it when composed the scores to his Harry Potter films.

Hook is a far way from Spielberg at his best - that much is certain - but as a family-oriented fantasy movie it is still rather enjoyable. Its greatest annoyance is that it is simply not as good as it should be - particularly when you consider Spielberg's next film projects were Jurassic Park and Schindler's List.
Posted by Grant at 5:03 PM