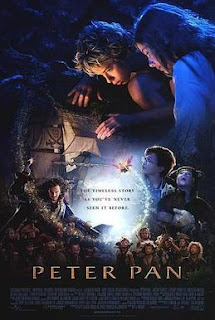 It is actually slightly ridiculous, given the popularity of the original work, to discover that Peter Pan has been adapted to live action cinema precisely twice. There have been animated films, notably Walt Disney's 1953 version that remains the most famous Peter Pan movie, and there has been a sequel and prequel, but as far as direct live-action adaptations go the filmgoer's choices are Herbert Brenon's 1924 silent film starring Betty Bronson and this: a 2003 film directed by P.J. Hogan.

Being the first Peter Pan film to feature colour and sound puts a pretty staggering amount of pressure on Hogan. At the time of writing it has been 13 years without a third film coming along, so for viewers looking for a straightforward adaptation of Barrie's work this is for all intents and purposes still the only game in town.

For those who never had a childhood in the English-speaking world: in Peter Pan Wendy Darling (Rachel Hurd-Wood) and her brothers are spirited away by the ever-youthful boy Peter Pan (Jeremy Sumpter) from London to Neverland, a fantasy island populated by fairies, Native Americans, and the pirate crew of the fearsome Captain James Hook (Jason Isaacs).

There is a strong sense of theatricality that overwhelms Peter Pan. It is obvious in the heightened performances, as well as Richard Briers' rather charming breaking off the fourth wall throughout the film. It was also shot entirely on a soundstage, so even comparatively ordinary settings like a forest or a cave wind up looking a bit fake. It is a weird creative choice, one echoed by both Steven Spielberg's Hook and Joe Wright's recent prequel Pan, and feels like something of a missed opportunity. The fairies, the flying children, the mermaids and the like all work to push a sense of the fantastical; having some proper grounding in Neverland would actually have accentuated those elements more. As the film is so theatrical in tone, and so artificial in setting, it is often difficult to get emotionally involved to any large degree.

The cast are generally fantastic. Rachel Hurd-Wood is a charming Wendy, and Jeremy Sumpter infuses Peter with a nice sense of bravado and a sort of unsettling hollowness: he never grows old, which means he never learns, and never really values anything. Ludivine Sagnier makes for a pitch-perfect Tinkerbell. Unlike Julia Roberts' fairly dischordant Americanised portrayal, Sagnier plays the role without dialogue and relying more on traditional clowning - another concession to the film's theatrical style.

Jason Isaacs is predictably fantastic in the dual role of Wendy's bookish father and as Captain Hook. There is a sharp contrast between the two men, and yet by having the same actor play both roles a whole world of unsettling subtexts begin to open up. The film is at its most interesting when it plays with issues of Wendy's stirring sexuality. She sits on the threshold between childhood and adulthood, and correspondingly her character reflects a sort of early and confused sexual attraction to both Peter and Hook, which makes the casting of Isaacs as her father even more strange and vaguely threatening. It is provocative stuff, but it's portrayed in a subtle and quite respectful fashion.

Unfortunately in many of the other scenes Peter Pan has a tendency to drag. It is in part a problem of the source material - it was close to a century old when the film was released, and the film certainly feels it. In the end the fairly leaden place of many of the scenes is what ultimately kills the film. It has good performances and a few genuinely nice scenes, but it all feels too dull in the end to seem worth the effort. I do think there is tremendous potential for a great Peter Pan film adaptation, but despite making a valiant attempt P.J. Hogan failed to realise it this time.
Posted by Grant at 5:11 PM