Bodacious Space Pirates: "The Final Battle at the Nebula Cup" 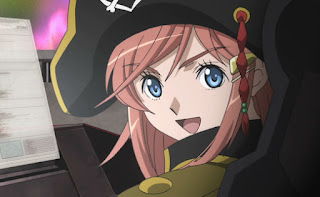 It is 26 May 2012, and time for another episode of Bodacious Space Pirates.

The Hakouh Academy's yacht club arrives at the planet Calmwind to participate in the prestigious Nebula Cap. Tensions are high, since the last time the Academy entered the race they nearly destroyed it entirely. As the race begins, Marika finds herself under attack - first from the race's paranoid chair, and secondly from a Bisque Company gunship desperate to take her out.

"The Final Battle at the Nebula Cup" is basically pitch-perfect Bodacious Space Pirates, combining comic dialogue with space pirate action, and peppered with nice moments of character for its extended cast. It is not particularly deep, but neither is it intended to be. This is bright, breezy entertainment with nice design work and plenty of energy. It has been a few months since the last time I watched an episode, and this was a wonderful way to pop back in.

Marika has developed considerably as a character over the course of the series. She started off so bright and relatively ignorant, and certainly very easily overwhelmed by the responsibility of commanding a pirate starship. Now she comes across as a consummate professional: talented, level-headed and able to handle herself both on her own and in the captain's chair.

This well-developed maturity is showcased in the episode's beautifully realised action scenes. The race itself looks great, and then once Marika falls under attack first from the chairwoman and then from a rival gunship the editing ratchets up and provides some really great combat sequences. The episode is not entirely based around action, thankfully, with scenes placed before and afterwards that develop the characters and progress the story. As far as episodes of Bodacious Space Pirates go, I think this is one of the better balanced ones.

A nice element of the series has been the occasionally moment of genuinely smart science fiction. I was struck in this episode at how Marika's classmate Ai collects constellation books: each colony planet publishes its own guide to the constellations in the night sky. Since every planet's stars looks subtly different, every planet has its own distinctive book. It's a minor touch, but it is used in the episode's climax as well - the clever science fiction idea becomes a neat piece of foreshadowing. I really appreciated it.

15 good episodes out of 21 gives Bodacious Space Pirates a quality ratio of 71 per cent. If this kind of light science fiction comedy-action is your thing, this is definitely a series worth checking out.
Posted by Grant at 5:28 PM