Star Trek: The Next Generation: "I, Borg" 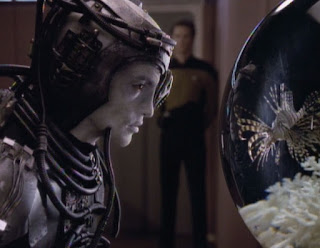 It is 11 May 1992, and time for another episode of Star Trek: The Next Generation.

The Enterprise responds to what appears to be an automated distress call. An away team discovers the wreckage of a Borg scout ship with one survivor. Dr Crusher (Gates McFadden) insists on bringing the injured Borg onto the Enterprise to heal its injuries, at which point a plan is put into motion to infect it with a viral attack that may damage or even destroy the entire Borg Collective.

The Borg are simultaneously one of the most effective and one of the most difficult elements ever created for Star Trek. They made an enormous impact in their first appearance, back in Season 2's "Q Who": an inhuman civilization so technologically powerful that the Enterprise was match for it whatsoever. They returned in the Season 3 finale "The Best of Both Worlds", kicking off a two-part epic storyline in which they kidnapped and violated Captain Picard (Patrick Stewart) and destroyed almost 30 Starfleet vessels in a single devastating attack. It actually stretched credulity slightly in that the Enterprise crew somehow managed to defeat the Borg in that storyline, and therein lies the Borg's problem: every time they arrive they must somehow be defeated, yet they are presented as so powerful from the outset that every victory against them makes them a little less effective

"I, Borg" attempts to side-step this problem by offering not a whole cube-shaped starship full of Borg but rather an individual Borg drone. It allows the episode to chart a very different course to the two preceding storylines, and concentrate less on life-or-death struggles and more on a moral and ethical quandary. Quite simply, it's an episode that does the sort of thing that Star Trek tends to do best.

It turns out that once disconnected from the Collective, an individual Borg does begin to revert back to its pre-assimilated identity. The memories of its past life - assuming it had one - may be gone, but it does begin to think in individual, self-centred terms. It is something foreshadowed in "The Best of Both Worlds" of course, since Picard was assimilated and then rescued by his crew, but here it is achieved with a long-serving drone instead. Here we see an apparently dehumanised drone named "Third of Five" slowly discover its independence, gain a name (Hugh) and ultimately come to make its own moral choices about its own future.

Jonathan Del Arco - who auditioned to play Wesley Crusher when he was younger - does a sensational job of playing Hugh, starting off as a typically soulless and frightening cyborg and gradually unfolding into an intelligent and quite sensitive young man. He manages to make his character come across as quite tragic, but also rather unsettling - this is the first time we've ever managed to see the Collective from the point of view of one of its drones, and it actually goes a long way to allowing us to actually relate to the Borg identity. There's an eerie scene early on where Hugh speaks about how he cannot hear the voices of all of the other Borg in his head any more - he's lonely, but lacks the language to communicate the feeling.

Does it all weaken the Borg as an antagonist? Absolutely it does - humanising your enemy is always going to do that - but it does push them closer to being a more traditional kind of Star Trek civilization. The bottom line is that as originally presented the Borg were such an unstoppable and unrelatable force that any attempt to bring them back for a second or subsequent appearance was going to weaken them. When they return in the Season 6 finale "Descent" they are weakened still further.

The episode provides great material for the regular cast, pretty much broken into two pairs. In the episode's early scenes Dr Crusher and Lt La Forge (LeVar Burton) get to dominate proceedings, as they heal and then analyse Hugh. This is a great episode for Crusher, whose hippocratic oath completely overrides any fear of the Borg or a desire to use it as a weapon to attack the whole Collective. Gates McFadden does a great job here displaying her character's carefully controlled rage. She feels obliged to go along with the plan to infect Hugh with a form of computer virus, but she refuses to let any of her colleagues sugar-coat the despicable act which they are undertaking. La Forge, as the series' resident awkward science geek, makes for a perfect friend to bond with Hugh. LeVar Burton's gives Jonathan Del Arco a lot of good material to bounce off against, and the two present a very strong, likeable friendship by the episode's end.

The other pairing belongs to Picard and Guinan (Whoopi Goldberg). One was personally taken and assaulted by the Borg in the most intimate and damaging of ways. The other watched her entire species be assimilated by the Borg, effectively resulting in their genocide. Having a Borg onboard was always going to unsettle both characters. Hearing La Forge and Crusher talk about the drone as an individual person with a name was always going to be an affront to them. First Guinan and then Picard wind up facing Hugh, and having their own prejudices and negative experiences challenged. It makes for stunning drama, and the episode's best moments by far. It's great writing, because it doesn't just generate strong emotional material for each of them when interacting with Hugh, but also when interacting with one another.

An episode this strong feels overdue after what has felt like a very shaky run of episodes for Season 5. It leaves the Season with 14 good episodes out of 23. With three more episodes to go, the season's quality ratio rises to 61 per cent.
Posted by Grant at 7:13 AM