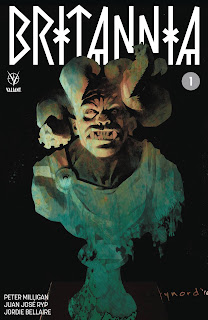 Antonius Axia is a Roman Centurion who rescues a vestal virgin from cultists and is subsequently allowed to read their mysterious Codex. Six years later Antonius works as Rome's best private investigator - at which point he is unwillingly dispatched by the Emperor to investigate reports of massacres and monsters in far-off Britannia.

Britannia is an unexpected new miniseries from Valiant. It's unexpected because unlike their usual run of loosely connected superhero and science fiction titles, this is a horror comic set in the Roman Empire in the year 66 AD. It is also most welcome as it brings into the Valiant fold the widely regarded British comic book writer Peter Milligan. He provides a great story here: well researched and intelligent, with a nice blending of Roman history and nightmarish horror imagery. Juan Jose Ryp's artwork is striking and distinctive, and beautifully expresses the combination of ancient world settings and horrible, violent imagery.

It's great to see Valiant stretching itself in this fashion. With any luck this is the first of many such stretches, taking the high level of quality for which the publisher is known and directing it towards all new genres of graphic fiction. (4/5)

Under the cut: reviews of Jackboot & Ironheel, Mechanism, and Ringside.

From a mash-up of ancient Rome and horror to a mash-up of Nazi Germany and horror: Jackboot & Ironheel takes the German POW escape genre and throws in the undead for extra measure. It is a clever blend of the two, and for good measure throws in a protagonist who used to be a professional footballer. It all makes for unexpectedly great entertainment. The book plays in archetypes, but plays with them to great effect: Millgate's stark, angular artwork is a good match for his gothic, horrific script. I am a little bit surprised at just how much I'm enjoying this book. (3/5)

The android Protoss is adopted by an orphaned boy. Meanwhile Protoss' creator comes under attack from security forces - raising the question of just who the enemy really is. This series boasts absolutely outstanding artwork, however there is enormous room for improvement in terms of its writing. The plot is a little confused, and fails to really drive home exactly what the situation in this future dystopia is and what precisely is going on. There's way too much dialogue as well, sometimes dominating entire panels with massive speech bubbles. There is some great material in here though, despite the slightly messy narrative, and to be honest some of the artwork simply makes the issue worth purchasing on aesthetic grounds. (3/5)

Ringside continues to occupy a quite unique and strange position as far as comic book genres go, sitting at an intersection between professional wrestling and organised crime. To be honest it sometimes feels as if the wrestling aspect is getting lost, but it's a minor criticism. This is a gripping, somewhat sprawling saga with a large cast of characters in varied states of desperation and failure. It all feels somewhat bleak and miserable, but in the most gripping of ways. Nick Barber's artwork is a stark, stylish highlight - I love his bold inks in particular. (4/5)
Posted by Grant at 8:21 AM