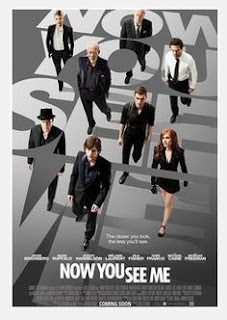 Four stage magicians (Jesse Eisenberg, Woody Harrelson, Isla Fisher and Dave Franco) unite as the Four Horsemen. At the climax of their Las Vegas show they appear to actually use magic to rob a bank vault in Paris. From there they engage in a mystifying crime spree, all the while pursued by an ill-tempered Federal agent (Mark Ruffalo) and a professional skeptic (Morgan Freeman).

I have a pretty firm rule when it comes to films about magic: it has to be possible. Christopher Nolan's The Prestige is a knock-out example: it presents an assortment of magical illusions and tricks, but displays them in realistic ways and explains how they are done. I remember around the same time that The Prestige came out there was a similar magic-themed thriller starring Edward Norton titled The Illusionist. It simply didn't work, and one of the key reasons it didn't was because its magical illusions were created using computer-generated effects. They weren't actually possible to perform, and that just made the whole film collapse in on itself. It could not be trusted.

That is basically the core problem with Now You See Me. If you are going to present your audience with a movie about stage magicians using their craft to steal huge piles of money, you need to make that magic understandable, practical, and believable. Once you cut corner and simply use CGI and hand-wave your explanations, the reality of your story has been broken. It simply doesn't matter any more.

So from step one Now You See Me is effectively broken for me. That is before I start thinking about the really poor screenplay and stereotypical dialogue, or the thinly drawn characters, or the preposterous storyline. The climax hinges on a shock twist, but it is not one that makes sense - so like the fake magic it threw me out of the story rather than pulled me in.

It is a pity because with better plotting and some really clever actual stage magic, a film about magicians undertaking heists has a huge amount of potential. The cast also boasts so much potential, most of which goes under-utilised. Jesse Eisenberg, Woody Harrelson and Morgan Freeman are great actors. Isla Fisher, while perhaps less accomplished, has repeatedly demonstrated great comic delivery and timing. Weirdly Michael Caine is rather sub-par here, either under-directed or simply disinterested. I am less sure about Mark Ruffalo, an actor who seems to have the same slightly lazy, laconic persona in every film I see him in.

Director Louis Leterrier seems to have one solution to the screenplay's shortcomings, which is to bury it in frantic editing, jazzy camera moves and a musical score that is so incessant you would swear it was made in the mid-1990s. Some sequences work rather well, but not enough of them, and none of them are enough to overcome the awful script. It is not simply that the script is stupid - I have seen and enjoyed many stupid films - it is that it is stupid but desperately tries to convince its audience that it is smart. Prod it gently with a finger and the entire film would fall apart. It's a terrible mess. It's a terrible movie.
Posted by Grant at 9:27 AM