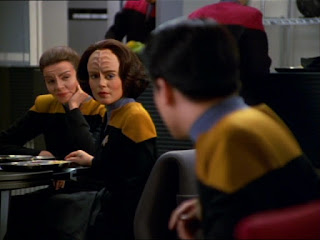 The crew of Voyager are invited to take shore leave on Sikaris, a planet whose people seem entirely devoted to the pursuit of enjoyment and pleasure. When Ensign Kim (Garrett Wang) discovers the Sikarians have advanced transporter technology that could teleport Voyager 40,000 light years closer to Earth, Captain Janeway (Kate Mulgrew) requests access to the technology. When that access is refused, Janeway and her crew face a moral quandary: stand by their principles and lose the chance to cut their journey home in half, or steal the technology and abandon what Starfleet is supposed to represent.

"Prime Factors" is a bit of a mixed bag. The central dilemma is a good one, and plays out in surprising ways, but it is the background of the pleasure-seeking Sikarians that actually lets things down. The result is a good episode, but one that frustrates a bit along the way.

The question over whether or not to steal the Sikarian technology is reflected in nicely unexpected ways. For Janeway it causes a crisis of confidence, as she debates whether by standing by her principles she will lose the respect of her crew. For Tuvok (Tim Russ) there is no question that she will lose that respect, and that leads him by logic to working directly against her wishes. It is a bit of a shock to see her most trusted ally betray her in this fashion, but it actually makes sense at the same time. For B'Elanna Torres (Roxann Dawson) the debate over whether to go behind Janeway's back causes a lot more internal conflict than she seems to have expected: the trust placed in her by the captain has clearly had an effect, and it's telling that when the attempt to use the Sikarian technology fails it is B'Elanna who refuses to attempt to cover up their actions. All three characters show development and change, which is a wonderful thing to see.

The episode also provides good material for Seska (Martha Hackett), the Bajoran Maquis officer who has made a couple of appearances this season. She is rapidly developing into a solid supporting character, and is clearly a lot more emotive and impulsive than many of her crewmates. For Seska there isn't even a debate: she wants the technology immediately so that she can return to the Alpha Quadrant as soon as possible. It is valuable to the episode to have such an agitating force present, as it puts B'Elanna's hesitations into sharp contrast.

The episode struggles when it comes to the Sikarians themselves. It is always a near-impossible feat for a science fiction TV drama to represent a pleasure-seeking people or a pleasure planet, as it always seems to collapse into either seedy sexual references or a sort of tedious naivete. In this case it slips fairly much towards the former. Harry Kim gets a brief romantic interlude - one that leads him to discover the super-transporter technology - while Janeway gets to flirt with the Sikarian leader Gathorial Labin (Ronald Guttman).Labin is the sleaziest of the lot, leering and fondling his way through several conversations with Janeway. It is not helped that Ronald Guttman is Belgian, and his accent seems to make the character even sleazier than was likely intended. It winds up feeling rather parodic. The Sikarian make-up is rather weak as well. Star Trek aliens as a rule either get bumpy heads or silly hair; the Sikarians are cursed with the latter, receiving strangle wire head-dresses to mark them out as different to all of the humans.