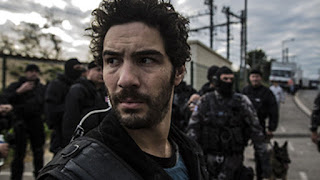 It is 2 November 2015, and time for the second episode of The Last Panthers.

Insurance investigator Naomi (Samantha Morton) pressures an imprisoned robber to give up information on the Marsielles jewellery heist. In Marsielles itself, police detective Kahlil (Tahar Rahim) leads a raid in a crime-ridden housing estate to track down the supplier of the heist's guns. In Belgrade, the last surviving robber Milan (Goran Bogdan) slowly works his way back into his former criminal organisation.

It is enormously impressive to see how the second episode of The Last Panthers juggles three storylines, all of which are narratively related but none of which ever actually intersect. In effect it is like watching three episodes of three different TV dramas at the same time. In the hands of lesser creative talents it could all fall flat. In the hands of writer Jack Thorne and director Johan Renck, however, it is some of the best crime drama I have seen in a while.

The episode takes off with a surprising start, since when the previous one ended Naomi was unconscious on a street in Belgrade, having been saved by Milan from his own fellow robbers - whom he was forced to shoot dead. I assumed the second episode would kick off immediately afterwards, but instead Naomi is already back in her apartment with her boss (an always entertaining John Hurt) making her breakfast. He offers her time off to recover from her trauma - she takes about three minutes before stopping his car downstairs and demanding the latest intelligence file.

Samantha Morton plays the role brilliantly, pouring a wealth of history and hurt into little hesitations and pauses. We often do not know what Naomi is thinking, but Morton shows us that she is thinking. More than that, there is clearly a connection between her and Milan that she isn't telling anyone. When she has to horse-trade information with a colleague, she hands over the identity of the two other robbers but subtly keeps details on Milan to herself. It plays out beautifully, hanging an enormous plot hook over both of their characters without over-shadowing what each of them are doing now.

As for Milan, he struggles slightly with a criminal underworld that has gone semi-legitimate in his absence. He is out of place in the very community in which he originated. Despite their more mainstream interests, there is still a pronounced threat of violence in the air. I spent the episode half-expecting someone to try and kill him.

The episode's strongest material is reserved for Kahlil. He plays a dangerous game, leading a tactical response unit into a notorious housing estate to find a cache of illegal weapons. When he finds them in the home of a late middle-aged couple, who claim they are innocent victims held hostage, he decides to pressure them on their real allegiance. He pushes too far, and the result leads to some wonderfully haunting and threatening moments at the episode's climax.

The Last Panthers is beautifully directed, with not just arresting photography but absolutely brilliant cinema-standard editing. The scripts are intelligent and fast-paced, and the triple narrative jumps back and forth in a clear and attention-grabbing fashion. It remains a bleak series, but from David Bowie's opening theme to the closing credits it is a smart, slick, brilliantly original experience.
Posted by Grant at 7:22 AM