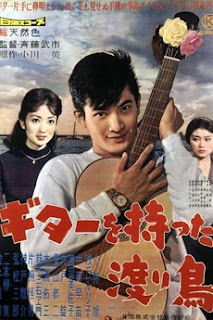 Young street musician Shinji Taki (Akira Kobayashi) wanders into the northern Japanese city Hakodate and straight into the affairs of local mob boss Akitsu (Nobuo Kaneko). Taki gets assigned to force a nearby family to vacate their house so that Akitsu can demolish it for a new amusement park - not realising that the woman he is trying to force out is Akitsu's own sister. Matters are complicated when a rival gangster, George (Jo Shishido), arrives on the scene - and believes Taki is an undercover police officer.

In the 1950s and 1960s Japan's Nikkatsu studio was churning out an astonishing number of cheaply made, fast-paced pulp crime and youth movies. The Rambling Guitarist, directed by Buichi Saito and released in 1959, delivers both at the same time. It stars a rockabilly young rebel with a Brando-style leather jacket and a guitar slung over his shoulder, and throws him into a stereotypical world of cigar-smoking gangsters, night clubs, and back alley shoot-outs. It is pulp entertainment through and through, but like a lot of Nikkatsu's output from this period it's immensely enjoyable to watch.


Shinji Taki is a character purpose-built to appeal to a teen audience. He dresses cool, he rebels against authority, he can handle himself in a fight, and he boasts a stylish quiff hair-do. What's more, he shows off a vulnerable side: there's a dead girlfriend in his back story, and his lonely, guarded persona suggests that with just the right girl by his side he might finally open up and love again. It's all a bundle of cliches, of course, but rising studio star Akira Kobayashi plays him in a hugely appealing fashion. It clearly clicked with audiences as well, as he played Taki in an additional seven sequels. Kobayashi also shows off a lot of chemistry with Ruriko Asaoka, who radiantly plays mob boss Akitsu's unsuspecting daughter.

While the film tracks along amiably for a while, it receives a hugely beneficial boost halfway through with the arrival of "Killer George" (Jo Shishido), a cynical and violent gangster from out of town. He is there to arrange a drug shipment through Akitsu's territory, but immediately develops a dislike for Taki. He recognises Taki as a police detective who shot and killed his partner, opening up a while new angle on the story and expanding both his and Taki's characters at the same time. Jo Shishido is a remarkably odd actor, probably best known for his performance in Branded to Kill. In the late 1950s he was concerned he wasn't getting good enough parts, so to emphasise his masculine looks he had his cheeks surgically enhanced. The result left him looking like Japan's meanest chipmunk, but it worked for him: he subsequently played mean assassins, thugs and criminals for years afterwards. The rivalry between Taki and George really enhances this film's second half, and it finishes on a nicely open-ended note. I have not seen any of the Rambling Guitarist sequels, but I'd be keen to see if George ever returns for a rematch.

The Rambling Guitarist works to a formula, but it does it well. It's short (less than 80 minutes), fast, and energetic. The typically Japanese widescreen ratio gives it all an epic feel, and the eye-popping colours really lift it off the screen. It's a real treat for fans of Japanese pulp cinema.

The Rambling Guitarist has been released, fully remastered, on a three-film bluray/DVD boxed set by cult cinema distributor Arrow Video: the first of their Nikkatsu Diamond Guys range. I have not yet seen the other two films in the set, but am keen to get to them soon. It's a great set and well worth tracking down. A second set of three films has recently been released.
Posted by Grant at 9:30 AM