Roadies: "The Load Out" 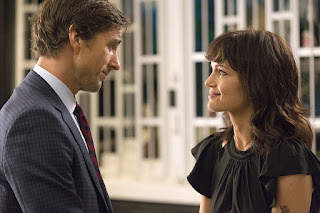 At a memorial concert for Phil (Ron White), the Staton-House Band road crew take stock of their lives and make decisions for the future. Shelli (Carla Gugino) is surprised by the arrival of her long-absent husband Sean (Michael Passmore). The cast learns of the impending break-up of the band. Reg (Rafe Spall) prepares to return to England. Kelly-Ann (Imogen Poots) struggles to comprehend Phil's dying words.

"The Load Out" finishes off Roadies with a combination of plot resolutions, musical performances, and one massively stupid climactic scene. It is certainly an above-average episode for the series, but in many ways it showcases all of the ways in which the series has struggled over the past ten weeks. It is, in effect, Roadies in microcosm: good actors reciting bad scripts, and a lot of potential squandered.

So what works? Surprisingly Shelli and Bill (Luke Wilson) get a satisfying conclusion to their season-long romance, one pushed into action by Sean's sudden and unannounced arrival. To an extent it is as corny and predictable as can be, but there is a particular skill Cameron Crowe has for this sort of crowd-pleasing romantic finale. Both Wilson and particularly Gugino perform it very well. The moment when Shelli tells Sean she is leaving him is very beautifully played. I have not been overly impressed with the Bill/Shelli romance all season, so it is nice to see that in the end at least it manages to work.

With Kelly-Ann the episode is basically thrown two balls and drops one of them. The ongoing bit that Kelly-Ann has never received a proper nickname by the road crew, and is therefore not a 'proper' roadie, gets closed off in a nicely satisfying way. At the same time her indecision over sticking with the crew versus going to study in New York is left wide open. I feel a firm resolution was required to close off her arc for the season, and we simply don't get it. Her romantic flirting with Reg does get some nice resolution to it, and it's a lot more ambivalent and subtle than the one Bill and Shelli gets. Even when the scripts have struggled, Rafe Spall and Imogen Poots have really worked their scenes together. They're actually the characters I am going to miss the most.

One of the highlights of Roadies has been its musical performances by live musicians. Here they over-do it, packing the episode's first half with so many cameos and songs that it almost becomes a concert film. It is arguably time that would have been better spent focusing on some of the other regular characters - Milo, Wes, or Donna - each of whom get short-changed somewhat at the music's expense. The band also gets a little under-catered, save for a striking and quite disturbing sequence involving bass player Rick (Christopher Backus) shaving off his beard.

There is a genuinely bizarre scene towards the episode's end where Phil's dead body is revealed, taxidermed into a standing position, arms outstretched for a hug. I'm not entirely sure human taxidermy is legal, but even if it is it's a pointedly bizarre scene to the point of farce. I used to think Taylor Swift's tour into space was the silliest element of this series, but stuffed Phil probably tops it. There really needs to be a person in the writer's room of Roadies, whose sole job is to point out the ideas that are too stupid.

Reg's suitcase is finally delivered. He lost it back in episode 1, and in a long-running and much-too-subtle joke he has been wearing a variety of crappy tourist t-shirts ever since. It is a joke that could have worked, and actually made for quite a symbolic moment in this final episode - he finally gets his suits back, but has evolved beyond his stiff, corporate identity, but as with much in this series the potential was ignored and the joke effectively thrown away. There is a similar problem with the episode's final moments, in which Reg leaves a plane and goes running back to the stadium to declare his love to Kelly-Ann. It deliberately echoes Kelly-Ann's short film and own run all the way back in episode 1. The problem is that those scenes were ten weeks ago, and without enough to remind the viewer of the similarity the reference falls a little flat.

The episode ends in an open-ended fashion, with Reg pounding on the stage door trying to get someone to open it. Will they? Will Kelly-Ann reciprocate his feelings? Will the Staten-House Band stay together after all? Crowe seems happy to leave it up in the air until the start of Season 2. That's a season, purely going by the viewing figures, we are unlikely to ever see.

Last episode I noted the similarities between Roadies and Studio 60 on the Sunset Strip, and after a few days to think about that I believe it's actually the perfect comparison. Both shows had the same flaws, and the same potential, and in the end simply failed to sufficiently get their act together to win a second season. In Roadies' case it's unconfirmed. There is a small chance Showtime might give it a re-tooling for a second year. I'm happy to try it out if they do. As it was with Studio 60, the cast are great and the dramatic potential is there. It's just up to the writers to work a little harder.
Posted by Grant at 11:22 AM