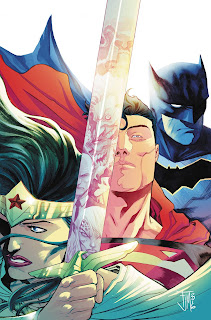 One of the best things about DC's New 52 was Francis Manapul. In The Flash and then Detective Comics he presented a solid knack for writing with an exceptional talent for art. His books looked absolutely glorious, boasting sharp design work with outstanding panel layouts and vivid colours. One of the worst things about DC's New 52 was the way it seemed to lose the overall sense of a united DC Universe. There was continuity between books, but the tone felt wrong: it was too dark and bleak for my tastes, and seemed to throw out the close familial aspect of the original DC Universe.

The new ongoing monthly Trinity is, then, a tremendous next step. Manapul writes and illustrates this new book, and his artistic talents have only grown stronger since he dropped off Detective Comics. It is a wonderful character-centric title, uniting Superman, Batman and Wonder Woman and showcasing their friendship. Not a lot happens in this issue - basically Diana and Bruce come to Lois and Clark's house for dinner - but there is more warmth and friendship on display than DC has allowed for some time.

The book also acknowledges and works with the current situation. The Superman that Wonder Woman and Batman knew is dead, and they're only just getting to know his pre-Flashpoint replacement. It has not thrown out the good parts of the New 52, it has simply replaced the bits that didn't work with a tone that does. I'm really enjoying DC's Rebirth titles, and this looks set to be another great addition to the line. (4/5)

Under the cut: reviews of Aquaman, Batman, Green Arrow, Nightwing, and Superman.

This is an excellent issue of scene-setting and plot development: there are no highlights as such, no splash pages or big action beats. Instead we follow Aquaman as he asserts his control over Atlantis and pushes for an answer to who has framed them for attacking the USA, and also Black Manta as he undertakes a violent takeover of the secret society NEMO and prepares his next move against his arch-nemesis. Abnett's focus on plot and a long-form narrative is what is really making Aquaman work at the moment. It's smart, rich in continuity and background detail, and is constantly pushing the story into new directions each issue. (4/5)

DC's aggressive twice-monthly schedule understandably puts a strain on its various creative teams, so it's not a surprise to see the Batman titles take a momentary breather with a crossover storyline, "Night of the Monsters". Dead bodies rupture and expand in the morgue to rise as giant, bloated creatures set on trashing the streets of Gotham City. It's all the work of the villain Hugo Strange, and Batman is forced to take the monsters down while still grieving for his recently killed sidekick Red Robin (who isn't actually dead, but Batman doesn't know that). It's all big, ridiculous action - the monster looks fantastic, as does Riley Rossmo's artwork generally. As for how the storyline goes overall, time will tell: this is a rock-solid introduction though. (4/5)

"Sins of the Mother" continues with a blend of current action and flashbacks, as Emiko continues on her mission to rescue her mother. It is a slightly odd storyline, since Oliver Queen is currently absent from his own book so soon after it relaunched (flashbacks aside). It doesn't ruin the issue by any stretch, but it does weaken it a little. No matter how strong a character Emiko is - and she's pretty great - losing the title character from a superhero comic feels instinctively wrong. Stephen Byrne's angular, heavily inked art is reasonably effective, but his bold colours really make things pop. (3/5)

"Night of the Monsters" continues with Nightwing taking the lead to investigate where the monsters - a second has just emerged - originated, and possibly how to stop them. Meanwhile Orphan and Spoiler struggle to keep the peace with large groups of civilians getting restless. It is not quite as striking as Batman #7; I think a lot of that comes down to differences in art style, but there is also a slightly flat story structure as well. The storyline continues next week in Detective Comics. (3/5)

With the first story arc over, Superman takes a welcome break for this superb done-in-one outing to the county fair. Clark has promised not to do anything as Superman, and to just spend the night getting to know their new neighbours. It's a beautifully staged light-hearted issue, deliberately told on a small scale and taking the time to really bed the Kents (masquerading, rather improbably, as Clark and Lois Smith) in their new environs. The character expressions by Gleason and Gray sell this issue and then some. It's wonderful, with a beautiful cover too. (4/5)
Posted by Grant at 5:16 PM