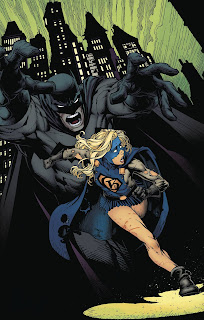 "I Am Gotham" gets a heartfelt and quite sad epilogue this week. Gotham Girl started out in this series as a bright new superhero in Gotham City. Now her brother is dead, her mind has been damaged by the villainous Psycho Pirate, and it has been revealed that her super-powers are a finite resource: once she uses them up, she is going to die.

Part of this mostly self-contained issue focuses on Gotham Girl fighting crimes around the city while talking to the imaginary idea of her dead brother. The other half focuses on Batman, once again watching an orphan vigilante suffering and desperately wanting to fix them properly for once. It's nice in that it taps into very strong, perennial themes for the Batman comics, and certainly Tom King writes it all quite well. A final page cliffhanger sets the book towards its next major arc, but all in all this is just a rather sad, rather sweet story about grieving a loved love.

It isn't perfect. I question whether or not, as part of his attempt to connect with Gotham Girl, Batman would take off his cowl and reveal his true identity and tragic past. On an emotional level it works, but it seems weirdly out of character. It makes this an imperfect issue: generally very good, but just flawed enough to irritate now and then. (3/5)

Under the cut: reviews of Aquaman, Green Arrow and Superman.

Aquaman has been broken out of Federal custody, and is racing back to stop Atlantis from entering into another war with the United States, and all that stands between him and that goal is Superman. I am usually not a big fan of superhero versus superhero fights, but here Dan Abnett actually has a pretty solid justification for Aquaman and Superman going toe-to-toe. It's wonderfully illustrated by Walker and Hennessey as well. My only real complaint is that once again we've got an Aquaman book going out of its way to show that its title character is more than just a guy in green tights talking to fish. The problem is that we're reading the book. We know Aquaman is a great character, otherwise we wouldn't be reading the book. This comic really needs to stop preaching to the converted. (4/5)

Emiko Queen was acting as a sidekick to her half-brother Oliver, alias the Green Arrow. She was also acting as a double agent against him, and as a triple agent against his enemies. Now the criminal super-back Inferno has been destroyed, Oliver is missing, and Emiko is back in the hands of her supervillain mother. It's a nice change of pace and tone to see this book put its title character aside for a few weeks and focus on Emiko instead. It's an intriguing first issue, combining current action with flashbacks. Stephen Byrne's artwork is a little cartoony in style, perhaps a little too much, but he pulls it back with strong inks and colours. (4/5)

DC had so much success with making Robin the actual son of Batman that it's no surprise to see them repeat the experiment: this issue features the official debut of Superboy, aka Clark and Lois' son Jonathan. He's a younger Superboy than we've had before, but so far seems a wonderfully likeable new character. This first story arc, based around the Eradicator, has been working from a fairly weak premise (does anybody really care about the Eradicator?), but in the details and the character moments it has been really quite good. That's definitely the case here, in an issue that works as both climax and epilogue. I'm really keen to see where Tomasi, Gleason and Gray take the adventures of Superman and son next. (4/5)
Posted by Grant at 9:43 PM