Star Trek: The Next Generation: "The First Duty" 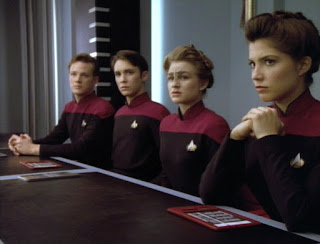 It is 30 March 1992, and time for another episode of Star Trek: The Next Generation.

The Enterprise returns to Earth, where Captain Picard (Patrick Stewart) has been invited to give the commencement address at Starfleet Academy. Shortly before his arrival there is an accident in a fighter exercise: one cadet is dead, and Wesley Crusher (Wil Wheaton) has been injured. As the investigation into the accident proceeds, it becomes clear that Wesley and his fellow cadets are hiding the truth.

Star Trek gives the military legal drama a run around the block in "The First Duty", which brings back former regular cast member Wil Wheaton for the second of two Season 5 appearances. While Wheaton did not leave the series on the best of terms, it is good to see that he was prepared to make occasional guest appearances - and it's even more encouraging to see the Next Generation writers room make proper use of him when he does come back. "The First Duty" is arguably the best single episode he ever got.

One of the reasons that the episode works so well is because it balances its story between Wesley and Picard. The two always worked best when put together, and the beauty in this particular case is that the conflict can be built on top of four seasons of character development. Picard may have found Wesley an irritant at first - he even admits as much in this episode - but over the years he grew to not only be Wesley's commanding officer but a surrogate father figure as well. There is a general warmth between them. When it becomes clear that Wesley has lied to cover up the circumstances of a fellow student's death, Picard's rage and disappointment is palpable. The episode pretty much entirely circles around one key scene, in which Picard summons Wesley up to the Enterprise to read him the riot act of his life.

The acting is generally excellent in the whole episode. Wheaton does a tremendous job showing Wesley slowly getting tied into knots with guilt. He wants to be loyal to his team leader Nick Locarno (Robert Duncan McNeill) and his teammates, but he also knows that hiding the truth behind the dead cadet's accident is the wrong thing to do. He is visited by the young man's father, who is clearly an emotional mess, but who wants to apologise for his son's letting the team down. When Picard gets involved he's basically left with no choice: one gets the feeling he admits his deception not because it's morally correct but because he cannot bear letting down his captain.

McNeill does an outstanding job as the charismatic, career-driven Locarno. When he urges Wesley to keep quiet like the rest of the students, you can actually believe Wesley would be convinced. It's no surprise to see that the Star Trek production team wound up casting McNeill as regular Tom Paris on Star Trek: Voyager, because he's just so good at his job here. They initially considered casting him in Voyager as Locarno, but elected to develop a new character. The producers claimed it was because Locarno was a poor fit; I suspect it was to avoid paying royalties to writers Ronald D. Moore and Naren Shankar. It's a pity, because despite his actions here Nick seems a more likeable guy than Tom.

It's great to see TV legend Ray Walston in a nice little role as Starfleet Academy groundskeeper Boothby, previously mentioned but never seen until now. He does a lot with what little the episode gives him. It is also worth noting Shannon Fill as Cadet Sito Jaxa - she unexpectedly returns to The Next Generation in the episode "Lower Decks".

This is nice change of pace and style for the series, and a pleasant character-based drama. It's great to have Wil Wheaton back for a week, particularly to see him and Patrick Stewart performing together again. This makes 13 good episodes out of 19 for Season 5, and a quality ratio of 68 per cent.
Posted by Grant at 5:19 PM