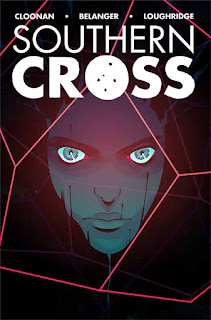 Southern Cross is an exceptional science fiction horror series that I honestly thought was a six-issue miniseries with a bleak and abrupt ending, until an unexpected seventh issue popped onto my pull list. Those first six issues followed Alex Braithe, a woman onboard the spaceship Southern Cross on her way to Titan to investigate her sister's murder. Things did not go well, and the Southern Cross eventually vanished without a trace. Now one survivor has reached Titan in an escape pod, and the authorities there have questions for him.

There's a nice shift in this issue: new story arc, new location, and a new viewpoint character: Nathan Carter, a manager on a huge corporate mining operation on Titan. There was already a sense of the Alien franchise about the first six issues, and that sense doesn't dissipate here. Alien 3 seems an enormous influence on the aesthetic of the Romulus Rig, and artist Andy Belanger does a great job of reflecting its grimy aesthetic and its enormous scale.

I was slightly surprised to see Southern Cross continue but I am enormously happy that it has. This is smart, bleak, moody science fiction and boasts great characters, dialogue and brilliant visual storytelling. Writer Becky Cloonan is just getting better and better. In a growing range of Image science fiction books, Southern Cross remains one of the best. (5/5)

Under the cut: reviews of Kim & Kim, Ms Marvel, and Star Trek: Waypoint.

On the road to Dimension 12, the two Kims get attacked by robot gorillas on the planet Never-Look-Back. We're three issues in, and Kim & Kim experiences a marked up-shift in quality. I really liked the first two issues, but they did have a scrappy quality to them. This issue feels a lot stronger and more self-assured. The narrative jumps back and forth in both time and location, but never gets confusing. The panel layouts are strong. The art is distinctive and beautifully coloured. This is a really cool indie book by a great creative team: I am really keen to see them develop over their next few projects, because they're already developing marvellously on this one. (4/5)

Ms Marvel's Civil War II crossover ends with a lot of unwanted closure: with best friend Bruno, with fellow crime fighter Becky, and with idol Captain Marvel. Like all issues of this comic, the narrative further drives Kamala Khan as a character: this time around she is really put through the wringer. While it's rock-solid stuff, and the art by Miyazawa and Alphona remains excellent, it really does feel a little bit dragged down by its Civil War links. If you don't have at least a superficial knowledge of what's going on in that series, several points of this issue aren't going to make enough sense. (4/5)

IDW launch an all-new Star Trek anthology series with two superb self-contained stories. In "Puzzles", a post-Nemesis Enterprise-E encounters a time-displaced Federation starship from the far future. It's a clever little story based on a neat central conceit, and positing a quite startling potential future for Commander Data and Lt La Forge. In "Daylily", Lt Uhura is trapped on a planet with a strange alien creature. It's a lighter, more gentle sort of story - more of a vignette than anything else - but it is surprisingly effective. The art in each story is perfectly suited to its respective tone. I could really get to like an anthology series with stories this effective. (4/5)