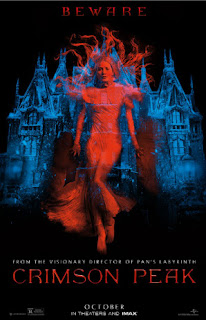 Bookish heiress Edith Cushing (Mia Wasikowska) is swept off her feet by the suave English Baronet Thomas Sharp (Tom Hiddleston) when he arrives in America seeking investors for his clay mining operation. After the sudden and violent death of her father, Edith marries Sharp and accompanies him and his sister Lucille (Jessica Chastain) to their crumbling estate Allerdale Hall. There Edith begins to witness supernatural apparitions, and grows to suspect her new husband and his sister's motives.

There are no huge surprises in Crimson Peak, but then with a film like this that is hardly the point. It is a lush and colourful gothic romance. It ascribes to a series of well-worn genre conventions, and plays them out in exactly the manner in which it expected. As a result I suspect any viewer coming to the film expecting or desiring a twisting narrative with surprises and shock reveals is going to walk away disappointed. The destination is almost irrelevant with a film like Crimson Peak: instead it is all about how stylish a ride it is along the way.

Thankfully, in the hands of director Guillermo Del Toro it is a very stylish ride indeed. He is almost inarguably one of contemporary cinemas most impressive visual stylists, particularly when it comes to elaborate gothic fantasy. His earlier films, particularly The Devil's Backbone and Pan's Labyrinth, have given him a well-earned reputation for visual flights of fantasy and horror imagery, and while Crimson Peak does not match the quality of those films it is absolutely a solid second-string hit for him.

The film is visually striking, whether it is the rich, sumptuous costumes or the intricate and foreboding architecture. Allerdale Hall is beautifully realised. The building is falling to pieces from lack of repairs, and a huge gaping hole in the roof leads to snow falling in the middle of its hall. The wind makes it creak and groan like a living creature. Huge swarms of moths infest its attic. The thick, bright red clay upon which it was built seeps up everywhere, making the entire estate look like a blood-soaked site of some inhuman massacre.

Even more impressive are the film's ghosts, who pop up at regular intervals to frighten Edith and thrill the audience. Del Toro has always had a skill for creating beautiful creatures and monsters, and that skill does not abandon him here. They are among the best-looking and most nightmarish ghosts I have seen in a film.

It would be easy at this point to assume the film is all design and no story. While Del Toro (with co-writer Matthew Robbins of Dragonslayer fame) tells a predictable tale, he tells it well. The most effective part of its telling are the performances. Wasikowska and Hiddleston both deliver earnest and convincing performances. Jessica Chastain is particularly good, revealing multiple layers in Lucille as the film progresses, and managing to turn someone quite monstrous in behaviour into someone quite tragic and sympathetic as the story goes on.

It would be churlish to hold Crimson Peak up against Del Toro's best and most original films and complain that it fails to match them, because it is clearly an attempt at something else entirely. It is a beautifully staged gothic potboiler, in which cast and crew have committed firmly to the genre and produced a wonderfully accurate new contribution. Fans of Hammer Studios will probably find much to love here - it's protagonist's surname is Cushing, after all - and lovers of Shelley, Poe and the rest of 19th century popular literature will appreciate it too. I had a ball.
Posted by Grant at 9:59 PM