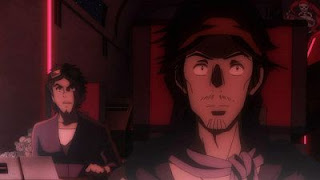 It is 2 June 2012, and time for another episode of Bodacious Space Pirates.

As Marika prepares for end-of-year exams, pirate ships are getting destroyed by mysterious pirate raiders. Marika comes up with a potential solution: pirates hiring one another for protection, both to shore up their defences and to satisfy the conditions of their letters of marque. She may, however, have underestimated the firepower of the raiders.

Bodacious Space Pirates enters its final story arc, and it looks set to be a pretty big one: after a gentle, character-focused first half, the episode's climax turns almost apocalyptic as a group of pirate ships get all but annihilated at the hands of a massive, technologically superior enemy vessel. The stakes immediately get about as high as they've been all series, and with only a few episodes to go there's every chance the series may end with a body count.

Something I really appreciated with this episode is how well it balanced its time. The mysterious raider ship - in fact by the very end there are two - would be enough to give the episode a sufficient hook, but a lot of other material gets slipped in beforehand. Marika is preparing for her high school examinations, and at the same time needs to find one more job for the Bentenmaru to qualify for a pirate's licence renewal. The yacht club elect Marika as their next President, and need to prepare for a final voyage for the graduating third year students. It is nice to see the continuing character threads get pushed along without sacrificing pace or time. There's more than enough room for both the slower and more aggressive moments.

Those aggressive moments come thick and fast at the episode's climax. The raider ship is beautifully designed and genuinely threatening, particularly once it becomes clear just how far it outmatches any of the pirate vessels facing it. Just when the tension seems fit for breaking point, a second ship turns up - and this one appears to have a whole new group of villains onboard. It's just the thing to raise the stakes for the final four episodes.

After a few early hiccoughs, Bodacious Space Pirates has developed into a wonderful light-hearted anime drama. This was the 16th good episode out of 22, giving the series a current quality ratio of 73 per cent. I think that's pretty impressive.
Posted by Grant at 9:21 AM