Doctor Who: "Mummy on the Orient Express" 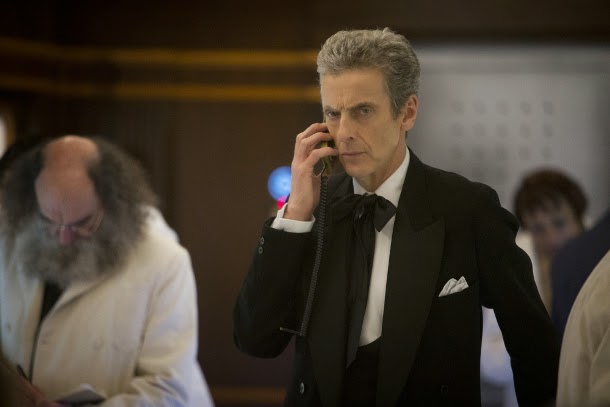 The Doctor and Clara are parting ways, with just one final journey to make: a holiday on the space-faring Orient Express. A murderer is stalking the carriages, however, and its victims have just 66 seconds from when they see the deadly mummy and when they die.

"Mummy on the Orient Express" is basically the exact sort of story I like in Doctor Who. It takes a vaguely bonkers premise (the Orient Express in space), makes it all rather creepy and frightening (people being murdered by a rotting cadaver in bandages), and then gives it all a fairly logical and unexpected science fiction explanation. It's a formula that's served the series for decades, whether its gas riggers being murdered by intelligent seaweed, or robot mummies in a 1920s country estate, or a seed pod transforming its victim into a plant monster the size of a football stadium. Here it's all done in fine shape, carefully squeezed into 45 minutes and still leaving room for the emotional repercussions of last week's confrontation between Clara and the Doctor. That's rather impressive.

This is the first Doctor Who script for Jamie Mathieson, although he's certainly got form within the genre having written for Dirk Gently and Being Human. Based on this episode I really do hope he sticks around to write some more. His characters are simply but cleanly drawn, and critically they're fleshed out just enough to service the plot. This isn't an episode that wastes time, and as a result it serves up what I think is the most enjoyable storyline we've had in a long time. It doesn't quite match the emotional heights I found in "Kill the Moon", but it tells a much more sensible story without as much egregious mockery of science.

The titular mummy is great, visually iconic and archetypal without seeming out-and-out silly at the same time. The 66-second period between seeing it appear and dying is a masterstroke of suspense, particularly the rather self-aware little countdown in the corner of the screen. I like the countdown because Doctor Who is, at its heart, a show for children, and I know that had I seen this as a child I'd have been counting down out loud every time.

I think between this and "Kill the Moon" the series has finally found its new tone, which is rather dark and confronting compared to recent seasons. It's not just the mummy that's horrific in this episode - there's also the sight of an entire carriage of chefs floating silently through space because the Doctor refused to hang up the phone. There's also the Doctor himself: too old and too tired to even pretend he can't be an inhuman monster from time to time. I like it, although I do worry he's going to be too unpleasant for some. I suspect there's a character arc in the making here, as the Doctor is slowly forced to rediscover and embrace his humanity.

Then there's the episode's final scene, in which Clara gets this close to making a clean break and getting to live a proper life. Instead she's diving back into travel on the TARDIS as an escape from making an unpleasant choice, and lying to three people (The Doctor, Danny, herself) in the process. Nothing good can come of this, and I'm now rather concerned for the long-term survival of both her and Danny. One or the other: I can't see this season ending now without some pretty bleak consequences.

So that's now six good episodes out of eight, or 75%. The season started off rather uneven, with "Deep Breath" being disappointing and "Robots of Sherwood" being downright abominable. Right now it seems to have really found its groove and is firing on all cylinders. Here's hoping it continues for the next four weeks.
Posted by Grant at 10:20 PM