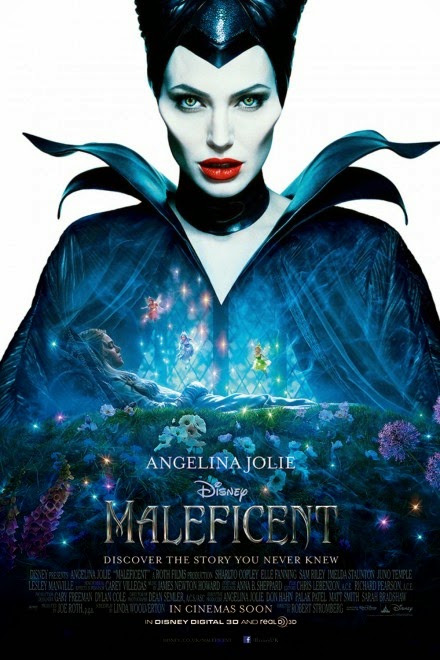 Walt Disney Pictures is one of those companies that knows when it's onto a good thing. When the Marvel movies hit big they swamped the market with two of them a year - soon, according to rumour, to become three. When Pixar's films became the most acclaimed animated films out there, they not only bought the company they styled their own feature films to emulate the Pixar storytelling style. When Tim Burton's Alice in Wonderland became a monster hit a few years ago it obviously hit a similar nerve, since Disney have a live-action Cinderella out early next year, a live-action Beauty and the Beast in development and before both of them a live-action Sleeping Beauty - or, in this case, Maleficent. It just came out on home video worldwide, so I took the opportunity to catch up with it.

This film is basically the live-action adaptation of Disney's iconic 1959 animated film Sleeping Beauty. They've re-jigged the plot considerably, adding an entirely new first act, and they've based it around the original film's villain - the evil fairy Maleficent. This was a good move, pretty much for two reasons: firstly, fairy tales are generally quite simplistic when it comes to characters and the easiest way to find one with a hint of depth is to zero in on the villain. Secondly, there's the design.

I know this is a review of Maleficent, but let's quickly talk Sleeping Beauty since I don't think you can properly discuss one without the other. Sleeping Beauty is, all things considered, a fairly hollow film. Its characters are for the most part bland, its score is weakly cribbed from Tchaikovsky, and the plot is alarmingly simple. Where it excels is in its visual aesthetic: quite simply, it's among the four of five most strikingly beautiful animated features Disney ever made. It took advantage of the then-new CinemaScope format like nobody's business, presenting enormous wide vistas in 2.40:1. It featured crisp colour and neat stylised design work. The very pinnacle of the film's aesthetic is Maleficent. She casts an immediately recognisable silhouette. She moves in a beautifully fluid fashion. She's far and away the most memorable part of the film, and that design is pretty much what Disney have used as the basis for their live-action Maleficent.

There is an enjoyable film in Maleficent: it's a neatly told, comparatively brief fantasy film with two female leads, solid performances and vivid computer-generated effects. At the same time, you can absolutely tell that its producer walked into a studio exec's office with a photograph of Angelina Jolie in one hand, a photo of the animated Maleficent in the other, slapped both on the desk, shouting "one hundred and fifty million dollars" and had a green light before they had left the room. This is, I think, the first time in history a studio has made a lavish remake of a costume.

And it's a fabulous costume. Angelina Jolie has never looked better. She inhabits the character brilliantly, showing depth and nuance where it arguably wasn't even required but improving the film every step of the way. The result is a five dollar rental that really does feel like a twenty dollar cinema outing. Jolie is just incredibly entertaining in the role, and makes the film worth watching regardless of its other merits - and to be honest those merits are all pretty solid. We could quibble over Sharlto Copley's dodgy Scottish accent, but it's hardly the worst Scottish accent I've sat through. The film deliberately transforms the original's three good fairies into vain and incompetent pests, which some purists may dislike. Personally, I found them rather funny.

This is a solid and enjoyable fantasy film that's centred on a genuinely brilliant performance. It's a subsidiary work, and never quite steps out from its predecessor's shadow, but at the same time it's a lot more enjoyable than your average Hollywood blockbuster. If you suspect you'll enjoy it, then you probably will - and it's always nice to see another female-led Hollywood blockbuster topping the box office around the world. Robert Stromberg, who made his directorial debut here, should be very proud.
Posted by Grant at 6:15 PM