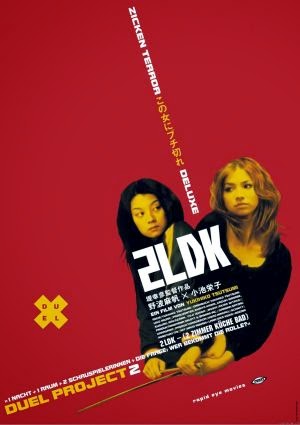 Two aspiring actresses share a Tokyo apartment. Nozomi is meek, earnest and overwhelmed by life in the big city. Rana is brash, worldly and over-confident. When they both find themselves auditioning for the same movie role, petty bickering breaks out into fully-fledged homicidal violence.

2LDK was written and directed by Yukihiko Tsutsumi as part of a special 'duel' project. Producer Shinya Kawai presented a challenge to Tsutsumi and fellow director Ryuhei Kitamura to make a feature-length movie using two actors in one setting, with production to last only one week. Kitamura's film was the samurai fantasy Aragami. Tsutsumi's attempt was this incredibly bleak black comedy.

It starts off slowly, picks up steadily, and by its climax is a no-holds-barred, highly confrontational thriller. I started smiling, spent a great deal of the middle act chuckling, and much of the third in a state of slack-jawed horror.

Daisuke Kizaki (Nozomi) and Maho Nonami (Rana) are both perfectly cast. Kizaki plays Nozomi as highly naive and sheltered - until her back is up against the wall. Nonami draws a surprising amount of depth from Rana: she's confident, bitchy and a bit of a bully, but it rapidly becomes clear how much is an act and how emotionally fragile and brittle she actually is.

Tsutsumi takes his time ratcheting up the conflict and the tension. The early scenes are dominated by passive aggression and bitchy internal monologues. Then he allows things to grow petty and heated. By the time they start becoming a little violent we're already halfway through the film. Thankfully it's a short feature - about 77 minutes in total - because I'm not sure the tension could be built any longer than it is.

By the film's climax Tsutsumi runs the risk of making events a little too silly. The conclusion is never really in doubt, nor is the film's final twist. It's slightly disappointing in that regard, since I had kind of held out hope he would surprise me with a different ending to the obvious. It stops the film from becoming an out-and-out classic, and leaves it instead as an entertaining if rather violent diversion.
Posted by Grant at 11:45 AM