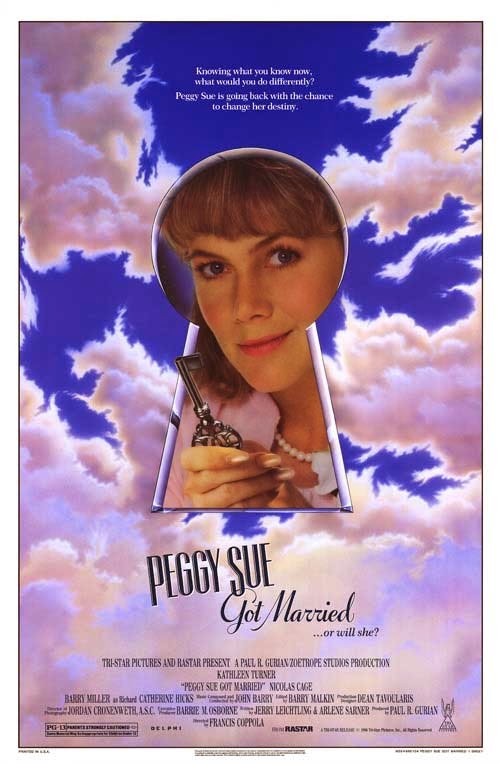 At her 25th anniversary high school reunion separated mother-of-two Peggy Sue Bodell is momentarily overwhelmed and passes out on the stage. When she wakes, she finds herself transported to the Spring of 1960 and her final year of high school. Given the opportunity to re-live her adolescence, will Peggy Sue make all new choices or simply make the same mistakes again?

Peggy Sue Got Married is an odd fish of a movie. It came out a year after Back to the Future, a film with a fairly similar premise that was tighter, better paced and much, much funnier. At the same time, Peggy Sue is a distinctive enough film to really avoid comparisons upon a closer inspection. It travels a similar path, sure, but it stops at different points along the road and reaches a vastly different conclusion.

Most striking of all is the film's tone, which isn't really out-and-out comedic, but instead works as a sort of strange elevated fantasy with regular comedic moments. In some places it almost felt vaguely like a David Lynch film, and certainly not the work of its actual director Francis Ford Coppola. Certainly this is the creepiest comedy I've seen in a long time, and that creepiness does feel relatively intentional.

Kathleen Turner is great as Peggy Sue, doing a brilliant job of playing a cynical middle-aged woman surrounded by idealistic teenagers. Nicolas Cage is great as well: this is back in the early, more inventive days of his acting career, and he deliberately gives an idiosyncratic, off-kilter performance as Peggy Sue's boyfriend and future ex-husband Charlie. The supporting cast is littered with talented actors who will all go onto other things, including Joan Cusack, Kevin J. O'Connor, Helen Hunt and Jim Carrey. They all blend together rather well.

The period detail is great: a little later on than Back to the Future, but of course with a 1960 setting its not too far removed either. Certainly it all looks and sounds rather convincing, and the weary adult Peggy making her way through the twee, wholesome world of 1960s provides much of the film's humour.

It's been years since I last watched this film, and to be honest the years have been fairly kind. It's a little dated sure, and could maybe do with a little tightening up or focusing in its second half, but there's definitely something to this movie. It lingers in the mind after it's done, not quite funny enough to be a comedy, not serious enough to be a drama, not straight-forward enough to be easily forgotten.
Posted by Grant at 9:09 AM