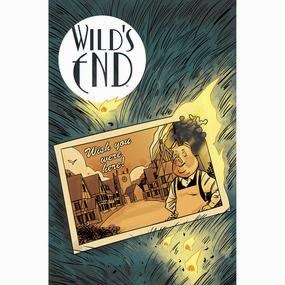 I'm in love with Wild's End, Dan Abnett and I.N.J Culbard's six-part miniseries from Boom Studios. It's basically The Wind in the Willows crossed with The War of the Worlds, as a small 1920s village of charming anthropomorphic animals are besieged by alien killing machines. As far as pitches go, that wins the year for me: I don't think I've heard anything funnier or more immediately attractive. It has me scratching my head. Why has nobody thought of this before?

What is impressing me the most, now that we're up to the 2nd issue, is that Abnett isn't just writing a superficial pastiche. These are interesting and well-rounded characters. They're based in archetype and tradition sure, but they've got agency and distinctive personalities. I already have my favourite characters, and I'm already invested enough in their lives that it's dramatic seeing any of them die. I'm only two issues into the series but I already want to read more adventures about the inhabitants of Crowchurch.

Culbard, who is also collaborating with Abnett on Dark Horse's Dark Ages, provides very attractive and clean artwork. It's elegant and simple, and matches the tone of the piece and the period setting extremely well. Culbard and Abnett make a great team. Hopefully there's more from them to come. (5/5)

Under the cut: reviews of Batman and Robin, Batman Eternal, Batwoman, Daredevil, Doctor Who, The Last Broadcast, Lumberjanes, Ms Marvel and Prometheus.

Oh boy do these guys know how to write a superhero comic. The body of Damian Wayne has been stolen and taken to the interdimensional hell of Apokolips. What does a loving father do? If you're Bruce Wayne you strap yourself into a demonic super-suit and go flying in like a bat into hell, with your sidekicks chasing behind you. Batman versus the New Gods? Now that's how to tell a superhero story. Gleason and Gray's artwork here is stunning. Time and time again these guys demonstrate how they're writing pretty much the most consistently good book in the New 52. (5/5)

This issue impressed me enormously for the very bold story choices it made. I can't even hint at what they are without spoiling the contents completely, but it worked incredibly well for me and suggests some fairly dark future developments for both Catwoman and Killer Croc. Other story elements, chiefly involving Batgirl, Red Hood and Jason Bard, aren't nearly as interesting, but they push the overall story along sufficiently. This is still a very uneven book, but when it shines it really does shine brightly. (4/5)

I've been slowly losing interest in Batwoman, thanks to fairly dull and predictable storylines and a clear attempt to push the book away from the elements that made me like the book so much in the first place: chiefly Kate's relationship with Maggie. Of course last issue we had the Futures End tie-in, which did promise some interesting developments on the horizon. Well, at least I assumed they were on the horizon. This issue kicks off with Kate in space, teaming up with Ragman, Clayface, Red Alice and Etrigan the Demon in a fight against Morgan le Fay. Talk about your unexpected twists. This is a crazy issue, but also the most interesting one since Blackman and Williams left. Marc Andreyko, you have my attention: I'm a sucker for odd superhero teams. (4/5)

This issue is pretty decent proof of why Mark Waid has been one of the all-time best writers on Daredevil. It would be easy to look at his run as "upbeat breezy Matt", somehow reversing the trend of "despairing sad Matt" of the last 20 years. It's more nuanced than that, however: Matt Murdock is still the tragic figure he's always been, it's just that Waid has brought in elements of brightness to contrast and even showcase the darker elements. This issue is great, with typically good artwork by Samnee. (4/5)

Having successfully launched monthly comics based on David Tennant's 10th and Matt Smith's 11th Doctors, Titan are now trying their luck with a third ongoing monthly dedicated to Peter Capaldi's 12th Doctor. At this rate we're going to have 13 monthly books for Doctor Who fans to pore over - if I was Titan I'd be keeping just this one regular and relegating the other Doctors to miniseries and one-shots. This one is pretty much on a par with the other two: so-so story, relatively nice interior artwork, and a very good ear for its particular Doctor's cadence and mannerisms. (3/5)

After last issue's shocking cliffhanger, things rapidly settle down in this penultimate issue. Harumi, Niko and Damon work to rescue Ivan - but is Ivan on their side or not? And how closely is S.P.I. tracking them? Some things get explained, other things continue moving forward in a mysterious fashion, and everything seems to be set for the seventh and final issue in November. I've really enjoyed this miniseries, and once it's complete I'm looking forward to re-reading it all at once. Production values are, once again, top notch. (4/5)

In this issue things actually seem to be all coming together, with the revelation of ancient Greek gods, trap-filled temples in the woods and other weird and mystical goings-on. Despite the more serious focus, it's peppered with humour: funny moments, silly dialogue, amusing characters, and so on. Every month this book proves to be a delight: it's an all-ages book that everyone should be reading, as well as buying copies for their kids. I'm very sad it's scheduled to wrap up next month: I don't want this to be an eight-issue miniseries, I want a whole ongoing to run for years. (4/5)

The Inventor has sent a giant robot to kill Kamala Khan. It's managed to trash her high school, but with the help of the Inhumans she manages to escape. I'm continuing to adore this comic, partly for the artwork but mainly because G. Willow Wilson has discovered the most sweet and awkward lead in Kamala. She's funny, brave, a little goofy, and all-round brilliant. I'm glad that digital sales are helping to support this book, because print sales have been fairly weak. Everyone should be reading this, it's consistently funny, interesting and quite distinct from everything else Marvel is publishing right now. (4/5)

I'm still not sold on Dark Horse's "Fire and Stone" four-book crossover, in which the first issue of one series seems to be spoiling elements of the last issue of another, but I am quietly impressed with their Prometheus series thus far. I didn't mind the film in visual terms, although it certainly had one of the worst screenplays in recent years. This comic has the benefit of re-using a lot of the visual imagery, as well as the freedom to tell its own much better story at the same time. That said, if you hated the film - and many did - I can't imagine there's anything here to make it worth the effort of reading it. (3/5)

Winner of the Week: Wild's End pips Batman and Robin to the post.
Loser of the Week: No losers this week, everything was enjoyable.
Posted by Grant at 10:43 PM