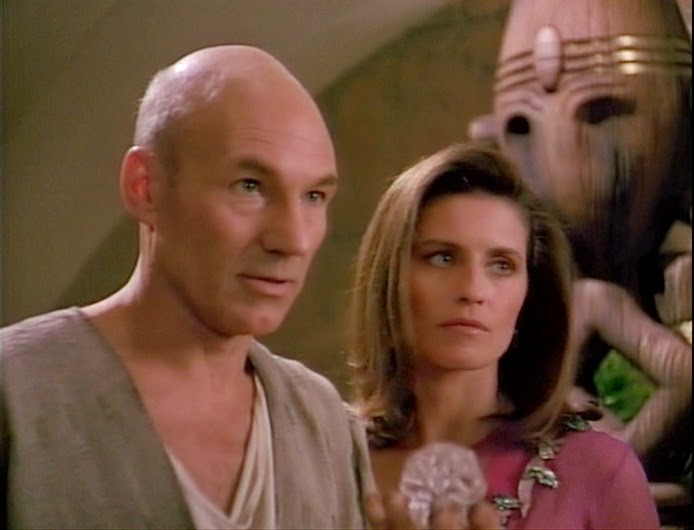 The great Next Generation quality yo-yo continues to bounce. At Dr Crusher’s insistence, a begrudging Picard travels to the holiday planet Risa for a week’s vacation. His holiday does not last long, however, as he gets tied up into an adventure involving a rogue archaeologist, a Ferengi with a gun, and a pair of mysterious aliens from the far future.

“Captain’s Holiday” has the sort of premise with ‘train wreck’ written all over it, and yet through a combination of canny writing and spirited performances it somehow manages to be one of the funniest episodes of Star Trek: The Next Generation so far. There’s a lightness of touch and a willingness to engage in archetype that simply makes it a lot of fun. It’s not going to go down as a series classic, but it does make for an entertaining 42 minutes.

For one thing the episode gives Picard a romance, and one that actually feels quite natural and organic. Vash (Jennifer Hettrick) is appealing, smart and funny – it’s no surprise she was brought back to the franchise on two more occasions. She bounces off Picard extremely well. The romance and banter is helped by the episode’s plot, which is I suspect quite deliberately simple and low-key. There’s an ancient artefact buried on the planet, and three rival groups or individuals who want to get it. For this sort of escapade you don’t want anything more complex than that. You just want a skeleton on which to hang a bit of romance and some jokes.

Despite the episode’s focus on Picard, it’s Commander Riker (Jonathan Frakes) who’s the comedy highlight. He’s a little too enthusiastic about Picard going on the holiday, and seems inappropriately keen to ensure Picard has sex with people on his holiday. He grins, he insinuates, he tricks Picard into buying an alien fertility idol. ‘Have I told you how imaginative the Risian women are, captain?’ he asked, while leering like an idiot. ‘Too often, commander,’ comes Deanna Troi’s very bored reply, before dropping her mic and leaving the stage.

It’s actually quite a bold move to make Riker this sleazy. I think the character didn’t really work in the series’ earlier episodes, because there was too deliberate an attempt to style him after James T. Kirk. What they seem to have settled on by now is a hilarious re-imagining of Kirk in which he comes across as how someone like Kirk really would: not dashing and sexy, but actually slightly embarrassing. It’s one of the things that makes me like the character so much, because they cleverly balance his smarmy, sexual innuendo with an actual noble and likeable personality.