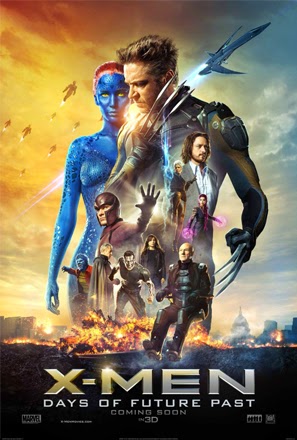 We've reached the stage where I find it very hard to comprehend the X-Men movies any more. The first two films, directed by Bryan Singer, I enjoyed perfectly well. Then Singer jumped ship toWarner Bros' Superman Returns, and rather than wait six months for him to return Fox forged ahead with Brett Ratner's rather muddled X-Men: The Last Stand. Then Fox produced X-Men Origins: Wolverine, a prequel that appeared to contradict half of the back story of the previous three films. Then there was a reboot of sorts, with X-Men: First Class introducing younger versions of some of the characters in a film set during the 1960s. That seemed an okay idea until we suddenly got The Wolverine, set after The Last Stand and ending with a Marvel Studios-style cliffhanger ending.

X-Men: Days of Future Past doesn't actually follow on from that ending at all. We're somewhere in the future, where giant robots called Sentinels have been systematically murdering all of the world's mutants. In a last-ditch attempt to save the future, Wolverine (Hugh Jackman) has his mind is sent back in time to inhabit his body in the early 1970s so he can track down rogue mutant Mystique (Jennifer Lawrence) and stop her from murdering Sentinel creator Bolivar Trask (Peter Dinklage).

So after tidying up the franchise a little with First Class, returning producer/director Bryan Singer now muddies it up more than ever with a film that brings back both the cast of the original trilogy and much of the cast of First Class for complicated time-travelling shenanigans that culminate in Magneto (played in the past by Michael Fassbender and the future by Ian McKellen) trying to kill all the humans for the fourth time in seven films. That dude needs a hobby.

This is a film that seems busy, and contains an awful lot of ruinning around (scenes are set in Russia, China, multiple places in the USA, Vietnam and Paris), but when you actually sit down to recollect what you've seen it becomes apparent that very little happens at all. Individual scenes and performances are good, but they're servicing a pretty poor movie. Days of Future Past has received a lot of positive acclaim, but I swear it's the result of a lot of smoke and mirrors.

The cast seems immense, but once Wolverine is back in the past it does a remarkably job of paring the characters down to a couple of white men. We do see some women and people of colour in early scenes, but once history is changed they all seem to be replaced by more white men - and this doesn't even take into account how a noted comic book storyline starring Kitty Pryde (Ellen Page) has been re-imagined to star Wolverine instead. And how old are these characters supposed to be now? The future scenes are never really set in stone, but even set 10 years from now Magneto would have to be in his mid-90s. If Mystique was in her teens in First Class and her mid-20s here, she'd have to have been in her mid-50s back in the original X-Men. Part of the film's conclusion attempts to dovetail the 1970s Wolverine into the start of X-Men Origins: Wolverine, except I'm pretty sure the dates and context don't actually match up to either that or the original trilogy. The continuity of this franchise is a logistical nightmare.

The film's very end implies a reset and a cleaner future for the original trilogy cast: characters resurrected, a status quo restored, and everything neatly lined up for subsequent outings. The next film, 2016's X-Men: Apocalypse, will instead feature the First Class cast and be set in the early 1980s. I don't even comprehend how these films work any more.

On a scene-by-scene basis, Days of Future Past is perfectly watchable and largely enjoyable. When viewed as a complete piece, it's a jumble of poor story choices and missed opportunities. Just take a look at the cast, which features Patrick Stewart, Ian McKellen, Hugh Jackman, Ellen Page, Anna Paquin, Michael Fassbender, James McAvoy, Peter Dinklage, Halle Berry, Omar Sy, Kelsey Grammer, Nicholas Hoult and Fan Bingbing. Collectively these actors have earned three Oscars, one BAFTA, 11 Golden Globes, eight Emmys, two Tonys, seven Oliviers and a Cesar, from a collective 108 nominations. This is almost certainly the most widely acclaimed cast of actors to assemble for one film in years - and they were asked to perform this?
Posted by Grant at 10:39 AM