Star Trek: The Next Generation: "The Hunted" 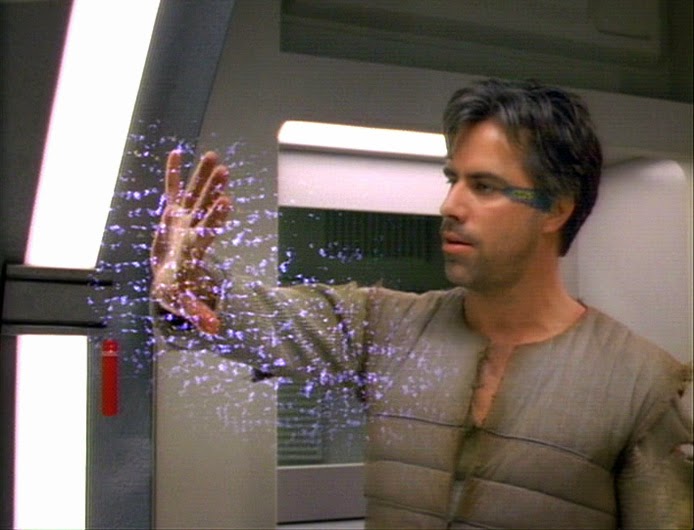 The Enterprise has travelled to the planet Angosia III, whose inhabitants are petitioning for Federation membership. When he is asked to help recapture a multiple-murderer who has shot his way out of a nearby penal colony, Captain Picard learns a lot more about the Angosians than they were previously willing to tell him.

Star Trek has always gained a lot of mileage from allegory: take a contemporary social issue, dress it up in bumpy heads and silly costumes, and aggressively interrogate the problem in prime-time in a comparatively safe fashion. "The Hunted" is one such allegory, only in this case it feels not so much shoe-horned into the story and forcibly kicked with a boot. This is the "Vietnam veterans abandoned by their government" episode. While it lacks subtlety it does benefit from some quality dialogue and a few genuinely entertaining scenes.

Jeff McCarthy plays Roga Danar. He is a genetically modified soldier, re-engineered by his government to fight a war. He is stronger and faster than the average human, can mask himself from starship scans, has no discernible heartbeat, and has an automatic violent reaction to situations of danger or high stress. When he and his comrades won their appointed war, they expected to be returned to normal and re-integrated into society. Instead they were exiled to an outer colony, and later - when they resisted - to prison. McCarthy plays the part well, and the episode's highlights are his conversations in the Enterprise's holding cell with Troi, Data and Captain Picard.

The Angosian Prime Minister Nayrok is played by James Cromwell, who will of course later get an Oscar nomination for Babe and play warp drive creator Zephram Cochrane in Star Trek: First Contact. Here he plays a stiff government type, written purely as a cypher to obstruct Picard's investigations. He's solid in the role, but given an actor of his calibre I was a little disappointed he was used as little as he was. Ah well - it was early days for Cromwell, they probably didn't realise what they had.

The episode features some nice moments of action, notably a great hand-to-hand combat sequence between Danar and Lieutenant Worf. It's nice to see Worf get some stuff to do; his job usually entails looking grumpy and being told "no" a lot.

The episode does end rather abruptly (they ran out of time and money to produce the intended shoot-out), but also somewhat satisfyingly. Danar and his fellow soldiers have stormed the Angosian capital. Nayrok has demanded throughout the episode that the Enterprise mind its own affairs and not interfere in domestic politics. With Danar's soldiers surrounding him Nayrok begs for Picard's aid, only for Picard to tersely inform him he's not supposed to interfere in domestic politics. It's a slightly dark, wonderfully bleak note on which to end.