Star Trek: The Next Generation: "A Matter of Perspective" 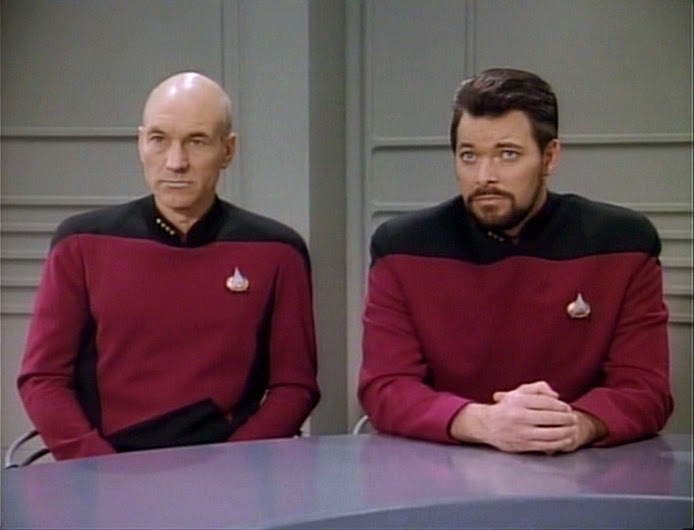 Commander Riker stands accused of murder, and to determine his guilt or innocence the events of the past day are played out on the Enterprise holodeck - according to the testimony of each witness. Is it possibly that Riker is the kill-

No of course it isn't, and that's one of the core problems with this kind of episode. We know going in that Riker's no murderer, so there's suspense to be had here. There's just a tedious 45 minutes of drumming one's fingers waiting for the inevitable truth to be revealed. This is why Star Trek can't do this kind of murder mystery. It can't be one of the regular cast who did it, so instead you've got to pick which of the poorly motivated and weakly written guest characters did the deed. And boy are they poorly motivated, and by golly are they weakly written. They're also pretty badly acted, but I can't work out if the guest cast are actually untalented or if they simply took one look at the script and figured if the writer's didn't care then why should they?

The episode is deliberately styled to resemble Rashomon, Akira Kurosawa's legendary motion picture thriller, in which the recollections of each witness are played out from their perspective, causing all manner of contradictions and inconsistencies. This is the finger-painted child's version of that story, in which Riker's testimony is evidently true from the get-go, and everyone else's are a farrago of obvious lies and exaggerations. There's no subtlety here, just a weird tendency to write the characters like a bad 1940s film noir: seductive and unfaithful wives, dogged policemen, conniving criminal husbands, and so on.

It's so frustrating. Last episode, "Deja Q", was great. The next episode, "Yesterday's Enterprise", is widely regarded as one of the best hours of television Star Trek ever produced. In the middle is this shit. It beggars belief. It tries the patience. There's no simpler way to say it than this: "A Matter of Perspective" is very poor television. This leaves Season 3 with eight good episodes out of 14, and a quality ratio of 57 per cent.
Posted by Grant at 11:41 PM