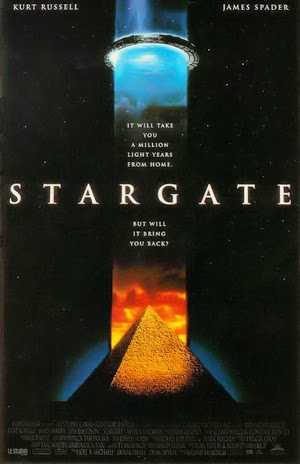 20 years ago today Roland Emmerich and Dean Devlin's glossy sci-fi epic Stargate opened in US cinemas. It was a pretty solid hit at the time, earning almost $200 million dollars against a comparatively modest $50 million dollar budget, and it established its creatives as a prominent force in Hollywood.

It's also got a pretty weird trajectory as a franchise, since MGM never managed to release a sequel into cinemas but did somehow manage to spin it off into four television shows. One of them, Stargate SG-1, even managed to outpace The X Files to become America's longest-running science fiction TV series.

It's a weird fate for a movie, since by now it's possibly the least well-known part of the whole enterprise. Well, okay, the cartoon Stargate Infinity is probably less well-known, but you get what I mean. This movie might have come first, but it's the TV franchise that's overwhelmingly the largest part of Stargate's pop culture footprint.
While I know SG-1 and its successors have their fans, I honestly don't think the property was ever better served than by the original film. It's an odd movie all told, as if Devlin and Emmerich had hit upon three-quarters of a good story and simply went ahead and filmed that. It's three-act structure feels a little squiffy, with too much time spent on the first act and too little on the second. Every time I watch it I walk away marvelling at the cool details and neat ideas, but wishing they'd served a more rounded and thought-out storyline.

The cast is great - but then when are James Spader or Kurt Russell not great? - and the film benefits from having a wonderful villain played by Jaye Davidson. It's a shame he only really made two films (this and The Crying Game), because Davidson is a striking presence onscreen. The production design is highly accomplished as well, and together with David Arnold's breakout score (he went on to score Independence Day and a truckload of James Bond movies) it gives the film a sense of wonder that's genuinely rare among these types of films.

And then, with $200m in the bank and a growing fanbase, Emmerich and Devlin jumped ship to 20th Century Fox and made Independence Day. MGM moved forward without them and continued Stargate on television instead. There's talk now of revisiting the original film and giving it a proper sequel, but to be honest that ship sailed 18 years ago when SG-1 premiered. Stargate feels like a silly television franchise now. The movie's almost a side attraction in its own theme park.

Roland Emmerich has directed 13 films to date, including Stargate: I still think it's far and away his best work. It's not perfect, and it doesn't quite live up to its concepts, but when it hits the mark it hits it in a wonderfully entertaining fashion.
Posted by Grant at 6:56 PM