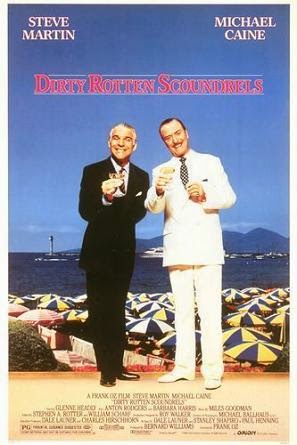 Here's a genuine question: why isn't Frank Oz thought of as one of America's great comedy directors. He's well regarded, sure, but most people know him as a guy who performs puppets rather than as a director. Yet take a glance over his filmography and there's a string of fantastic movies: Little Shop of Horrors. What About Bob. Bowfinger. Death at a Funeral. Then there are the films that sit outside the comedy genre: The Score, The Dark Crystal and The Indian in the Cupboard. He's a massively talented guy, and I feel like he's been somewhat overlooked.

Take Dirty Rotten Scoundrels, his 1988 comedy about con artists on the French Riviera. It captures Michael Caine and Steve Martin somewhere at their creative best, and they bounce off each other marvellously throughout. It's got a well-plotted storyline, and great comic moments. It's got a great supporting cast including Glenne Headly, Iain McDiarmid and Anton Rodgers. The whole film works like a charm in the tradition of great classical Hollywood movies.

The film allows Michael Caine to indulge in one of his most aristocratic performances. You'd swear he was channeling David Niven, which I suppose isn't a surprise since the film loosely remakes an earlier comedy that starred Niven. Caine's gained a reputation over the decades for appearing in anything that paid him money and that fit into his schedule. He's simply never stopped working. The result is that while Caine's presence in a film can never be considered a guarantee of that film's quality, it's always a guarantee of Caine's quality. He's just completely reliable in pretty much every role he takes.

Steve Martin is kind of at his height here, giving a broad performance that contrasts very well against Caine's more austere and restrained work. It's easy to forget how manic his performances could get in those years before Father of the Bride and Parenthood sort of slowed him down and led him to dial down his performances.

This movie is well written, faultlessly performed and directed with real precision - and that's the thing with Oz. Comedy is really hard, and he has a real knack for getting it right. He's done it over and over again. We should start praising his work more, before one day he won't with us any more (he's 70 now, so hopefully he's going to be around for at least a few more decades), and then he'll never know.
Posted by Grant at 3:38 PM