Star Trek: The Next Generation: "The Offspring" 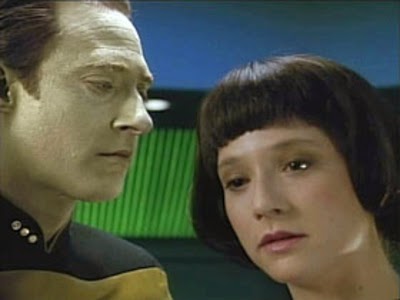 Commander Data surprises his fellow officers with the revelation that he has constructed a new sentient android: his child Lal. While Data attempts to learn how to be a good father, a Starfleet admiral comes to the Enterprise intent on taking Lal away for study.

"The Offspring" is an episode produced with the best of intentions, and with a really solid concept at its core, but it falls apart for a variety of reasons. In the end it's an episode that I want to enjoy, rather than one that I actually do enjoy.

The parts of the episode that work are the ones specifically involved Lal: Data has not simply recreated an android in his own image, he has created one that's more sophisticated. Watching Lal get progressively more nuanced and emotional, until ultimately her system overloads, is a great plot that's well expressed.

The part that doesn't work is the attempt to generate a drama out of Lal potentially being taken away by Starfleet to study. The episode treats it as a genuine risk - indeed Picard risks demotion by refusing an admiral's orders to do it - yet we know as viewers that it's nothing of the sort. We've been through this dilemma, in Season 2's "The Measure of a Man". We remember it pretty well, not in the least because it was the single-best episode of the first two seasons. That episode firmly established that sentient androids have equal rights to sentient organisms, so the idea that Starfleet might spirit Lal away is farcical. What makes it worse is that Picard actually brings the events of "The Measure of a Man" up, so any chance viewers might have forgotten that episode are pretty much blown out of the water.

The episode also fumbles the final scene, which should be an easy home run. Data's daughter has died, but he's the only person on the ship not emotionally affected. A scene is attempted, but it pulls its punches. This had the opportunity to be a moving tragedy, but instead it feels as if Data's unplugged a toaster.

So an admirable intent is let down by a sloppy and unconvincing execution: both Echevarria and Frakes will go on to make great television, but they simply don't make any here. It leaves Season 3 with nine good episodes out of 16, and a quality ratio of 56%.
Posted by Grant at 11:02 PM