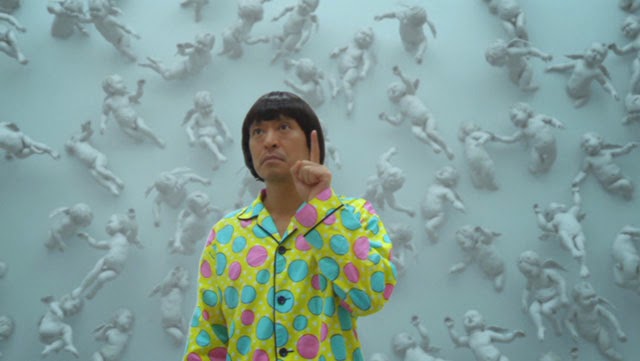 A middle-aged Mexican wrestler prepares for his most challenging match ever. Meanwhile a Japanese man in polka dot pyjamas wakes up in a room with no doors. The next 90 minutes either make no sense, or a lot of sense, depending on how you want to view the film. Either way this is one of the strangest films I have seen this year. I'd claim it was the strangest, but I'm not quite sure it surpasses the supreme oddness of Sergio Caballero's The Distance (reviewed here). It's a great match for it though, and they would make one hell of a double bill.

Symbol is the work of writer/director Hitoshi Matsumoto, who also plays the unnamed man in the white room. He is a comedian turned filmmaker, whose comedies have slowly been developing a strong cult following in the English-speaking world. His 2007 film Big Man Japan got a pretty widespread release on DVD, while his most recent film R100 was a well-regarded hit at this year's Melbourne International Film Festival. In between sits Symbol, which wasn't nearly as well received and to my knowledge still hasn't received a commercial release outside of Japan.

A lot of viewers will hate this film. I suspect a small niche audience will adore it. I certainly do.

It's slightly unexpected to begin watching a Japanese comedy and find yourself watching a masked wrestler named Escargo Man preparing for a match. We meet his loving wife, his supportive father, his wide-eyed adoring son and his foul-mouthed chain-smoking nun daughter. Throughout the film we see this family prepare for the match of Escargo Man's career, with a rising tension that he might not be up to the task. It's an odd series of scenes but not outrageously funny - just intriguing.

The other half of the film, however, is some of the funniest stuff I've seen in ages. The Japanese man is trapped in a white room. He discovers odd-shaped buttons all over the walls and floor that turn out to be the penises of animated cherub statues. He presses one, and a toothbrush pops out of a hatch on the other side of the room. He presses another, and gets an enormous vase. A third provides a bonsai tree, a fourth a megaphone, and so on. Eventually he presses one that opens a door on the other side of the room, but by the time he runs over it has closed. What ensues is a protracted series of increasingly complicated schemes to press the button and get through the door in time. It's like watching someone play an old adventure game, with all of the appropriate maddening frustration when you can't quite solve the puzzle.

The two narratives do intersect by the film's climax, but I won't tell you how - I will admit it wasn't in a way that I expected.

This is a very weird and deliberately silly film, that by its end actually feels oddly profound. It does require a little patience, however, as well as an interest in what films can do beyond telling a coherent story. Your mileage may vary, of course. Oh boy, can your mileage vary.
Posted by Grant at 5:00 PM