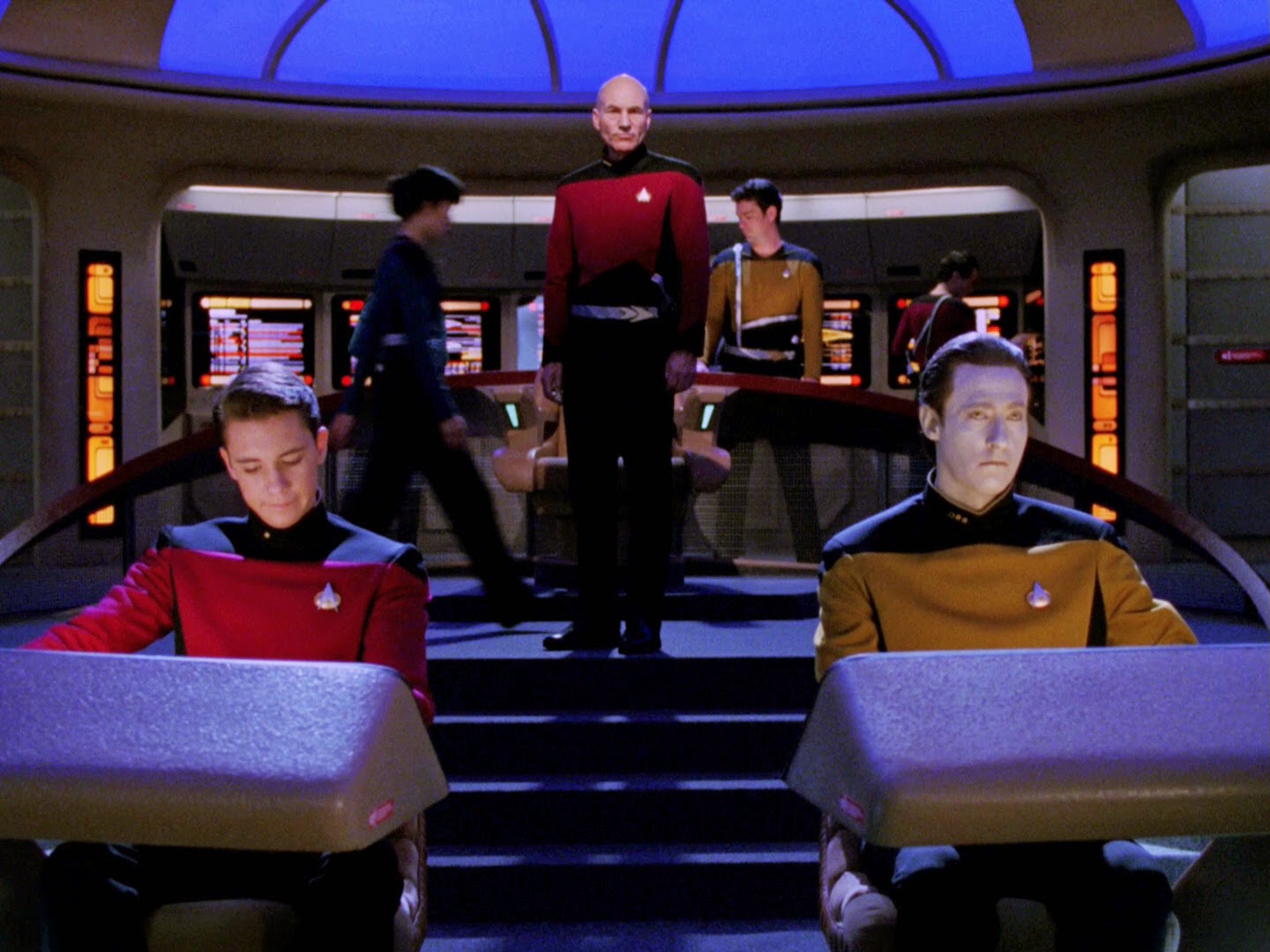 The Enterprise encounters a rift in time, through which emerges another Enterprise - the USS Enterprise NCC-1701C, presumed destroyed 22 years earlier. With its arrival in the present, however, history has been completely changed: the Federation is losing a war with the Klingon Empire, Lieutenant Worf is no longer the security chief and in his place is the two years' dead Lieutenant Tasha Yar.

"Yesterday's Enterprise" is widely considered to be one of the best episodes of The Next Generation ever made, and it's a belief that's actually very well founded. It works equally well along three tracks: It's very well performed and scripted, it's packed with treats for long-term enthusiasts, and it bases itself around a genuinely provocative ethical dilemma.

So let's take those tracks one by one. The episode is a tour de force for Patrick Stewart, who gets to perform the same character in a very different light. Picard is still the same man, but he's become a soldier instead of a diplomat, and seems wearier and hardened. Whoopi Goldberg gets her best material yet, with Guinan's innate sense that history has been changed forcing her into difficult conversations with both Picard and Lieutenant Yar.

Oh yeah, Tasha Yar. It's worth addressing her presence here. It was a creative masterstroke to bring the character back for several reasons: firstly, the absence of Worf left a hole in the security role - and who better to fill it than his predecessor? Secondly, it gives viewers the opportunity to see the character again, and it must have been a relief for Denise Crosby to finally get some reasonable quality writing to perform. Third - and most importantly - it adds a personal element to the episode's ethical dilemma.

Yar's return isn't the only treat for Star Trek fans. When The Next Generation was launched and the Enterprise given the registry code NCC-1701D it left a hanging question as to what ever happened to the Enterprises B and C. One of those questions gets answered here with the exceptionally well-designed Enterprise-C, a little smaller and boxier than the present-day ship but representing a logical progression between the Enterprise-A of the movies and the Enterprise-D of The Next Generation. We also get the first-ever female captain of the Enterprise in the shape of Captain Rachel Garrett, whose appearance here is all-too brief. It's a shame future episodes never managed to find a way to bring her and her ship back - it feels like we only scratched the surface.

There's always an appeal in alternative universe storylines, because it gives audiences a chance to see different takes on their favourite characters and settings. There's certainly a major difference here, but it's subtly presented: the costumes are slightly more severe, with higher collars and all crew carrying holstered phasers. The lighting is deliberately darker and harsher, and the bridge set has undergone some pretty major renovations to better resemble the battle bridge seen back in "Encounter at Farpoint". The climax gives the series the opportunity to kill off the entire regular cast, which has a perverse satisfaction all of its own.

All of this detail would make "Yesterday's Enterprise" a popular episode by itself, but what makes it such a strong episode is the dilemma at its centre: Picard only has Guinan's word that history has changed for the worse. If he keeps the Enterprise-C in the present, it might give them a small extra chance against the Klingons. If he sends it back through the rift, everyone onboard will certainly die, but history might be changed for the better. He will never know the results of that change, since his life will transform along with everything else. In the end it's purely up to trust that he goes through with the plan at all.

This is the best episode of Star Trek: The Next Generation so far. It's gripping, inventive, dramatic and heartfelt. It works beautifully from beginning to end, sandwiched between two wonderful scenes on Ten Forward. In the first, it's Guinan introducing Worf to prune juice ('A warrior's drink!'). In the last it's Guinan again, her history restored, asking Geordi: 'Tell me about Tasha Yar.' Perfection.

15 episodes into Season 3; nine of them have been good. This was has been really, really good. The quality ratio stands at 60%.
Posted by Grant at 7:51 PM