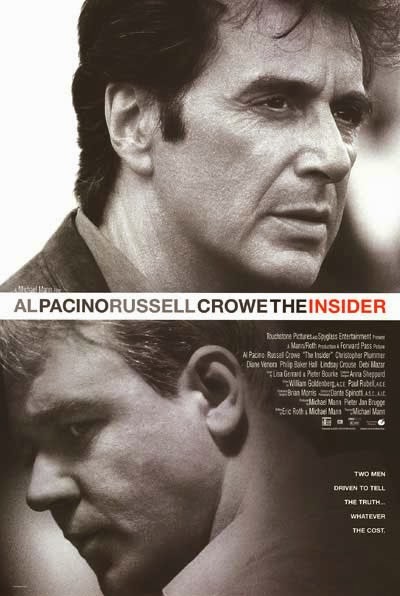 Sorry if I ever sound like a broken record on this, but 1999 was the single-greatest year for American cinema of my lifetime. It was possibly the single-greatest year ever; I can't back that up though, because I really haven't seen enough movies from earlier decades. I honestly don't remember another year when so many exceptional films came out of Hollywood or the American independent cinema scene. Not just good movies either, but hugely influential ones too: it was the year of The Matrix and The Blair Witch Project, for example.

One of my favourite films from 1999 is The Insider, Michael Mann's drama - based on a true story - about a journalist who teams up with an industry whistleblower, only for both of them to get screwed over by the system they're fighting. It's got stunning performances, a tightly written and direct screenplay, and Mann shoots it all with the same flair and precision you'd give to a big budget action blockbuster: only it's not a blockbuster. This is a film that is, in essence, about men in suits shouting at each other in rooms. It's just picked great men in great rooms, and played out enormously impressive arguments.

Lowell Bergman (Al Pacino) is a journalist and segment producer for the prestigious CBS current affairs show 60 Minutes. Jeffrey Wigand (Russell Crowe) is a recently fired scientist who used to supervise research and development for the cigarette manufacturer Brown & Williamson. Bergman tracks down Wigand because he wants assistance understanding some leaked corporate documents. What he gets is a tightly-wound, conflicted man ready to expose the tobacco industry's darkest secrets - if only there was a way around his non-disclosure agreement.

This film marks a career-best for Russell Crowe. His Wigand is jittery, awkward, pent-up with rage and wonderfully unpredictable. It's a widespread belief that he won an Oscar the following year for Gladiator precisely because he lost the Oscar for this. That may or may not be true - what I can say is that he's doing better work here than I've seen him do before or since.

Al Pacino plays Bergman in a much more reserved and direct manner than his usual 1990s performances. He comes from the theatre, and his acting is usually very heightened and theatrical. Those elements are still there in Bergman, but Pacino has wisely pulled a lot of it back to create a passionate, ethical and relentless career journalist. While there are numerous other strong performances the film centres on Wigand and Bergman, and Pacino and Crowe's performances dominate in the mind once the film is done.

The film features sensational elements all working together. Early scenes generate a genuine sense of menace, as Wigand grows paranoid that Brown & Williamson are stalking him and even threatening his family's life (the real-life Brown & Williamson denied all of Wigand's accusations, and Mann is careful not to confirm either way what actually happened). Pieter Bourke and Lisa Gerard's score is absolutely stunning - so good that a few of the tracks and riffs got used a year later in Gladiator. Mann carefully weaves in other contemporary news stories (the film largely takes place in 1995) to give proceedings a proper sense of place and time, and to emphasise the never-ending nature of career journalism. It's a long film, running about two-and-a-half hours, but it earns that length and then some. Its final scenes are damn-near perfect.

Michael Mann was on a real run in the 1990s with this, Heat and The Last of the Mohicans. It'd be difficult to pick which of the three was the best-made movie, but I can certainly point to my favourite in an instant: The Insider is an absolutely brilliant film.
Posted by Grant at 7:15 PM