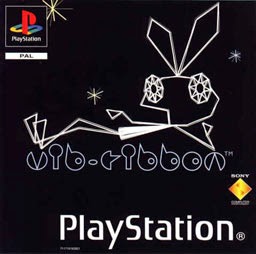 In 2014 Sony's PlayStation turns 20 years old. It was a revolutionary console, exploding the Nintendo vs. Sega paradigm that had dominated videogaming for a decade and its effects can still be felt today. PSX20 celebrates the 20th anniversary of Sony's Playstation videogames console by counting down my 20 favourite videogames for that platform. These aren't necessarily the best PSX games ever made, but they are the ones I liked and played the most. Today I take a look at #4: the 1999 rhythm-action game Vib Ribbon.

Much of what I wrote about PaRappa the Rapper - rhythm-action gameplay, distinctive design aesthetic, a game quite unlike others on the shelf - also applies to Vib Ribbon. Not surprisingly, it even shares a designer: Masaya Matsuura. The biggest differences are that Vib Ribbon is even more abstract and distinctive, and I like it even more. This isn't just one of my favourite PlayStation games - it's one of my favourite games on any platform.

You play as a skipping rabbit, rendered in deliberately crude wire-frame graphics. It's a black screen, and the rabbit is designed with a bunch of white lines. She skips along another line, and occasionally a weird bump or shape will scroll up along the line, and you'll have to press the right button at the right time to successfully skip over it. As the music continues, the shapes get more complex and approach faster. The better you perform, the more advanced your character becomes. Eventually, if you play well enough, she transforms from a rabbit into a fairy. Perform poorly and you'll devolve into a crudely animated frog, and then a tadpole. Then you die and have to begin the level again.

Since you're playing along the music, the game's set-list is massively important. It's a wonderful collection of horribly twee, immensely addictive ear-worms; both insanely cute and ridiculously Japanese. The Japanese pop combo Laugh and Peace provided six songs. That might not seem like many, but that's where the true genius of Vib Ribbon comes to the fore.

The reason why the graphics and gameplay are so simple is because Matsuura had them designed to be small enough to fit entirely into the PlayStation's RAM. That completely frees the CD-ROM drive from loading code during gameplay. The six songs are all recorded onto the disc like a conventional CD; like a lot of PlayStation discs, you can pop the disc into a standard CD player, skip past track #1 and play the music like any other music album. What this means for Vib Ribbon is that you can, once the game loads, take the disc out entirely and replace it with any CD you wish. It's a game that, as a result, has for all intents and purposes an infinite number of levels. Use whatever music you wish, and the game will procedurally adapt to it. Different styles of music will result in different kinds of levels. Slow, gentle ballads make for a slightly dull, ridiculously easy game. Thrash metal can result it a button-mashing nightmare.

I love this game for its unique look, its clever mechanic, but most of all for the way in which Matsuura looked at the PlayStation from a completely different angle and created a videogame unlike any others on the market. It's a real gem.