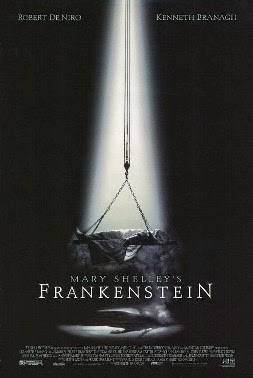 I think one of the most overlooked movie franchises ever would have to be American Zoetrope's range of classical horror adaptations. The company kicked the series off with Francis Ford Coppola's Bram Stoker's Dracula in 1992, followed it up with Kenneth Branagh's Mary Shelley's Frankenstein in 1994 and concluded with Tim Burton's Sleepy Hollow in 1999. I really like all three films. I'm not sure why they stopped at three, but they still stand up today as really distinctive and entertaining movies.

Of the three, however, it is probably Branagh's Frankenstein that's the least successful. I don't think it's necessarily Branagh's fault, and certainly I do still enjoy it overall. It's visibly the work of a younger director. Dracula was Coppola's 20th feature film as director, and Sleepy Hollow was Burton's eighth. Frankenstein was Branagh's fifth, but critically it was his first time with a large budget on a large-scale studio film. There is an over-eagerness to impress, and that does occasionally make the film trip over itself.

The film is often held up as the most faithful adaptation of Mary Shelley's novel ever filmed. That may indeed be true, but it does still diverge considerably from its source. Some of the additions actually make the film a more cohesive and emotionally effective experience, while others actually feel like lost opportunities.

The first half hour is actually the killer: it's weirdly stylised compared to the rest of the film, and the performances have been deliberately pitched at such an oddly happy, twee level. It's only once Frankenstein commences his dreadful experiments that the film begins to relax and work the story more successfully. By the time we reach the early adventures of the Creature (Robert De Niro), it's as if we're watching a completely different movie. The film continues to improve as it goes on, so by the time it reaches its climax it's almost recognisable from its terrible opening scenes.

De Niro plays the Creature better than any other actor before him. He's supported by an outstanding make-up job (you can see his scars heal and his hair begin to grow as the film progresses), and a strong screenplay. He plays the Creature the way it's written by Shelley: powerful, intelligent, deeply misunderstood, and utterly amoral. When he finally settles down to confront Frankenstein one-on-one it's a wonderful sight. In retrospect it was a very unusual role for De Niro to take, but I'm glad he did.

Branagh is perfectly good as an actor in this film, but his direction leaves a little to be desired. He had an awful tendency in his early films to move the camera around for its own sake. This reached its apogee here: some scenes the camera spins around the actors so much that it's almost dizzying - and entirely unnecessary. Thankfully his later films like Thor and Jack Ryan have settled down in visual terms.

The real revelation here is John Cleese, playing a deadly serious university professor and managing to make himself utterly humourless and rather creepy at the same time. It makes me wish he'd get hired to do more drama - based on his work here he'd be marvellous at it.

Mary Shelley's Frankenstein is not a perfect film, but there's definitely more than enough here to make it a broadly enjoyable one.
Posted by Grant at 12:49 PM