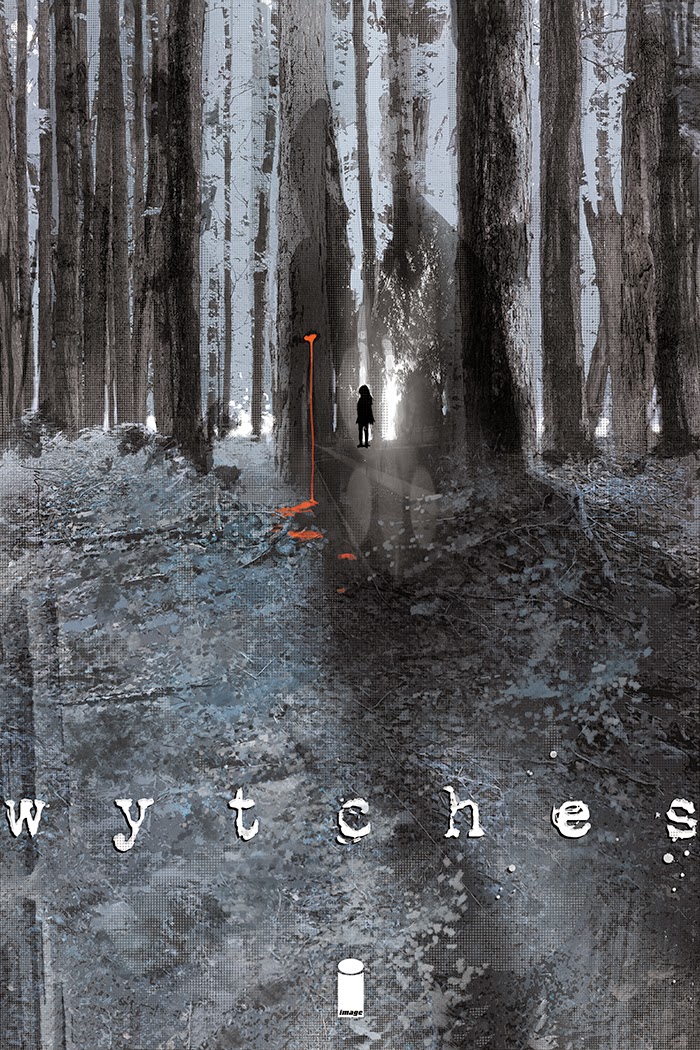 Before I had even had the chance to read issue #1 of Wytches, the new monthly comic from Scott Snyder and Jock, it had already been optioned for a feature film adaptation. Now that I have read it, I'm not surprised: this is a dark and effective new horror comic that hooks the reader in from the get-go and presents an intriguing set-up.

What this book most reminded me of was The Blair Witch Project, in that it heads out into the woods and makes them scary. It takes the idea of witches and appears to transform them into something new. It makes you afraid of trees. It's a great opening chapter, one made even better by its extra length.

I've raved at length about Scott Snyder in the past: his work on Batman in particular has been some of the best writing that character has received in years. He's telling something more adult and darker here, and it's perfectly complemented by Jock's artwork. I love Jock's stuff, and he brings his A-game to the book and gives it a nice dark, creepy, almost savage style. I'm really keen to see where this goes. (5/5)

Under the cut: more reviews from last week, including Annihilator, Batman, Batman Eternal, Dark Ages, Doctor Who: The 10th Doctor and FBP: Federal Bureau of Physics. Reviews of other comics published on 8 October can be found here.

With two out of six issues in the bag, it's already becoming clear that Annihilator, while exceptionally good, is charting very similar territory to Morrison's earlier works. He has spoken in the past of his attempts to create a fictional character, The Invisible's King Mob, and then actually swap places with them in some chaos magic-inspired fashion; that's actually what appears to be driving the narrative here. Hollywood screenwriter Ray Spass is dying of a brain tumour - only now one of his characters, Max Nomax, is telling him that the tumour is actually information made physical in Spass' brain, and that it's allowing Nomax to escape to the real world. Mad, yes. Derivative of earlier Morrison works, yes. It's also brilliant: well written and featuring stunning painted artwork by Frazer Irving. (5/5)

With "Zero Year" done and dusted, we're back into the present with the top-secret new story arc "Endgame". It's not what I was expecting. Previous arcs have been very grounded in Gotham City itself, and Batman's regular cast of bad guys. Other DC heroes really haven't had a look-in. That all changes here, because Batman's up against the entire Justice League - who have seemingly gone mad and decided to kill him. It's a really welcome change of pace and tone, with a final page cliffhanger I honestly didn't see coming. This is a really good week for Snyder fans. (4/5)

Batman Eternal keeps plugging along. This is a reasonably good instalment that pushes several arcs along a little further: Killer Croc resurfaces, Batman has his first encounter with the Spoiler, Catwoman runs into trouble, and Batgirl goes after Jason Bard. This isn't the classic story that its pedigree initially promised, but it's entertaining enough for now. Thankfully this issue doesn't have Hush in it - and that always helps. (3/5)

A dwindling band of medieval warriors defend a monastery against an undead alien-controlled army. As the third issue of four, this is the traditionally satisfying instalment in which things finally get explained and the story is pared down for its climax. As a result I'm really happy with this one: Abnett writes a smart story with well-defined characters and some original ideas, and Culbard illustrates it all with clarity and simplicity. I hope this book gets more attention once it wraps up. Actually it would make for a pretty stunning movie. (4/5)

The 10th Doctor's first storyline comes to a climax as he and Gabby defend her family laundromat against a dangerous horde of psychic aliens. The thing that has impressed me the most with these recent Doctor Who comics is their tone: they feel like authentic Doctor Who, period-accurate and with their chosen Doctor's tics and mannerisms perfectly expressed. That's certainly the case here, and while the storyline itself feels a little bit derivative it coasts along nicely on the back of Abadzis' characterisation and Casagrande and Glass' artwork. (3/5)

I rather like this month's sales gimmick for DC Vertigo, which is to start the comic on the cover rather than the front page. It's something I could actually see taking off if there was a particularly enterprising creative team willing to do it full-time. This issue starts a two-part flashback to Cicero's time in college, presenting something rather like Revenge of the Nerds if said nerds were quantum physicists and there was a genuine potential for a bodycount. It's reasonably enjoyable, but not absolutely riveting: I do feel like FBP has failed to live up to its potential somewhat. Hopefully it will get a chance to improve heading forwards. (3/5)
Posted by Grant at 8:57 AM