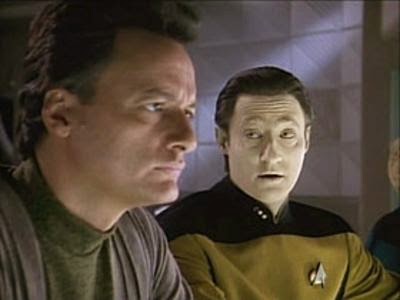 Q is back on the Enterprise, abandoned by his own people and stripped of his god-like powers. While he struggles to adjust to his new-found mortal status, a vengeful alien force attacks the Enterprise in the hopes of getting revenge for Q's past antics.

So, series premiere aside, it's time for the third of Q's annual guest appearances. They just keep getting better and better. I wasn't really sold on his Season 1 episode, "Hide and Q", but did really like his Season 2 episode, "Q Who" - although that was mainly because it introduced the Borg. This third episode is a fully-fledged comedy, to which everyone involved brings along their A-game. It works particularly well because of Q's three earlier appearances - he's got a rapport going with the regular cast now, and the episode riffs on those relationships marvellously.

Take Worf. For three years now Q has belittled him, teasted him, nicknamed him "Microbrain". Here he's helpless and afraid. 'What do I have to do to convince you all I'm mortal?' Q asks. Worf's deadpan reply? 'Die.' A later scene involves Guinan stabbing him in the hand with a fork to find out his mortality for herself. It's actually all rather cruel, but at the same time Q's had it coming for two-and-a-half seasons, and the payback is so wonderfully enjoyable.

The episode's real surprise for me is Q's relationship with Data. It's unexpected, since they haven't really interacted before, and it's a perfect match. Data's an unemotional android, and so lacks the resentment towards Q that his crewmates share. At the same time Q is resenting being human, which is the one thing Data has always wanted. It's one of those "eureka" moments in script writing: so completely obvious, yet most writers probably would never have thought of it. John de Lancie and Brent Spiner bounce off each other marvellously: particularly effective is de Lancie's performance once Data has nearly killed himself protecting Q from the Calamarain. He comes across as so completely overwhelmed: there are so many new facets to the experience that he doesn't quite know how to react.

There is a subplot involving a moon set to crash into a planet killing untold millions of people, but to be honest the whole plot works as a hook on which to hang Q's misfortunes. It works as a framework, but isn't particularly interesting in its own right. It's all an excuse really, to have fun and play around, and everyone does that brilliantly - and I love Corbin Bernsen's cameo during the episode's climax.

This is the eighth good episode out of 13: we're halfway through Season 3 now with a quality ratio of 62 per cent.
Posted by Grant at 7:14 AM