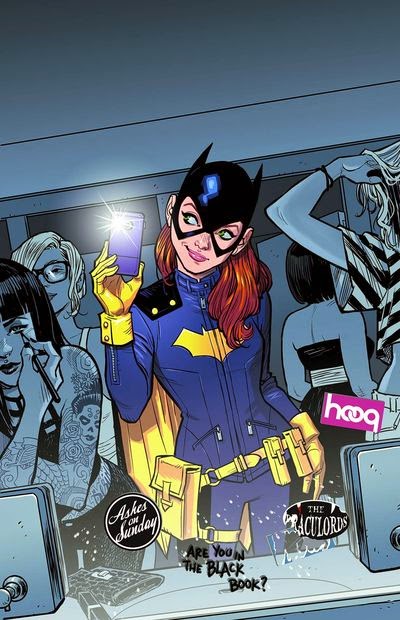 This week saw DC release the first issue of a revamped and re-envisaged Batgirl. It's a surprise it didn't receive a whole new volume with a fresh issue #1, because the changes here are much more significant than most cases where a book is relaunched. It has new writers - Cameron Stewart and Brendan Fletcher - and a new artists - Babs Tarr. And it's not simply a matter of changing Batgirl's costume, setting or supporting cast, all of which they do, but it's a matter of telling a completely different kind of story.

This issue sees DC Comics make a play for the independent, light-hearted market. It's the same market that's supported several recent Marvel titles like Hawkeye and She-Hulk, not to mention a raft of genuinely independent books. This is a Batgirl who dresses more sensibly, and who has real-world and relatively banal issues to face: studying at university, dating boys, paying her rent, and so on. Even the plot of this first issue is comparatively mundane, after the city-wide mayhem that marked many of Gail Simone's earlier issues.

As a book in its own right, it's fantastic and gets top marks. Within the context of the New 52 it feels a little roughly shoe-horned in: this Barbara Gordon shows little or no resemblance to the driven, guilt-wracked Barbara of the last three years. It's not bad - in fact I like this Batgirl a hell of a lot more - but it's interesting that DC have taken such a clear different tack with the book. Hopefully it will be a tremendous success. (5/5)

Under the cut: I'm in Brisbane this week, so just a few reviews of stuff that wasn't ordered for me back in Melbourne: Alien vs Predator, Copperhead, Doctor Who, and Klarion.

Alien vs Predator: Fire and Stone #1

I am not sure I quite like how Dark Horse are undertaking this Fire and Stone project. I understand splitting it into four interrelated miniseries: Aliens, Predator, Alien vs Predator and Prometheus, but running all four miniseries more or less simultaneously is a less understandable choice. It did work between the first issues of Prometheus and Aliens, as one book ended on a question that got partly answered by the other. Here, however, it feels more like the plot of those two series have just been partly spoiled. This is a pretty messy issue; difficult to follow and seemingly assuming the reader will already know what's going on. Once we've finished all four issues of Prometheus and Aliens, I suspect we will. (2/5)

The end notes to this issue explained that while the first issue was written with a full script, the second was written "Marvel method", with writer Jay Faerber plotting the book, Godlewski translating that into art and then Faerber completing the dialogue. I'm not sure if that's what made this issue so much more readable than the first, but it certainly is much better. The dialogue is more assured, the art is more dynamic, and all up it's a much more entertaining read. I was on the fence with issue #1, but this has made me quite keen to read issue #3. (4/5)

This was actually released last week, but I only managed to track down a copy this week. The Doctor takes Alice to see her mother's favourite pop artist - only to discover he's not the musical legend they were led to believe. This leads them to Mississippi in 1931, for a 'celebrity historical' starring musical legend Robert Johnson. It kind of works, and I certainly like that a deeper story arc is slowly being revealed issue by issue, but as a self-contained story it feels a bit throwaway. Hardcore enthusiasts for the Matt Smith era will likely enjoy it. Those on the fence might want to give it a miss. (2/5)

I honestly don't quite know what I think of this one. It's a revival of the old Jack Kirby character Klarion the Witch Boy, revived about 10 years ago by Grant Morrison as part of his Seven Soldiers project, and now brought back by Nocenti and McCarthy. On a page by page level it's a riot of imagination and intrigue. Altogether it's rather indecipherable. Future issues might clear things up, but by then I worry much of its target market will have moved on. You only get one first issue, and I do feel this one missed more marks than it hit. (3/5)
Posted by Grant at 9:42 PM