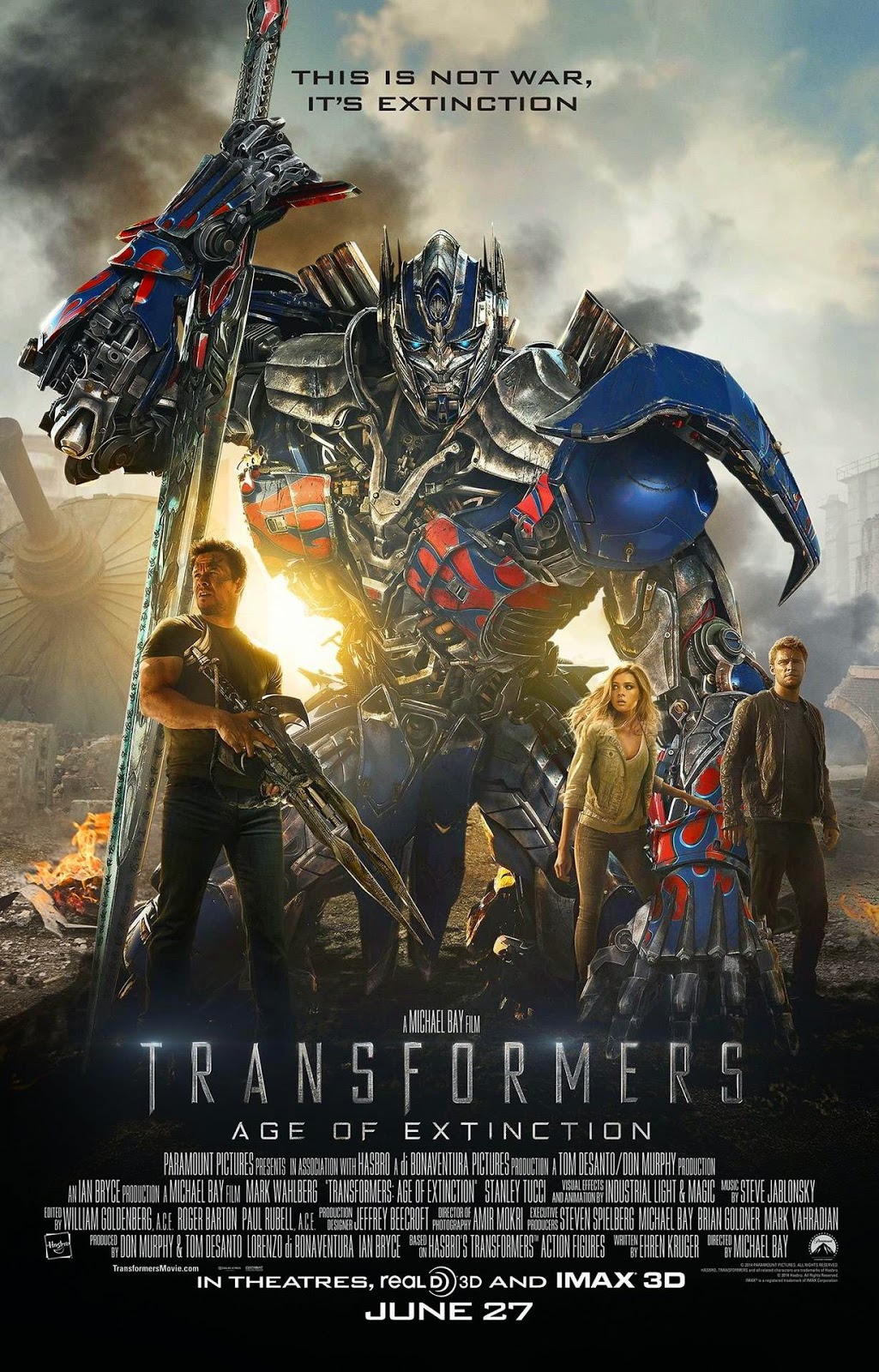 The things we'll watch when they're free on an aeroplane. Michael Bay's Transformers: Age of Extinction is a bizarre and bloated monstrosity of a film, confusing to sit through and vaguely repellent at the same time. This hasn't stopped it from grossing more than a billion dollars worldwide in cinemas, which means that either I don't know what I'm talking about or audiences really like watching giant robots punch each other regardless of the film's actual quality.

I suppose I have to admit I'm in that latter category as well. I watched Bay's original Transformers with enthusiasm, and thought it was a big, brash and relatively enjoyable exercise in sci-fi mayhem and 1980s cartoon nostalgia. Its sequel Revenge of the Fallen was an unexpectedly awful film, not only incompetently told and staged but actively racist and leeringly sexist. I went and saw the third film, Dark of the Moon, hoping that I'd get something more like the first and less like the second. What I got was something a little less racist and a little more sexist, with a weirdly unbalanced narrative that back-ended most of the action into the film's final hour. With a track record of one out of three I certainly wasn't going to risk spending money on a fourth Transformers film, but when presented with the opportunity to watch it halfway through a night flight from Singapore to Melbourne? I guess I'm ultimately as addicted to giant robot fights as everybody else.

So some time after the events of the last Transformers, in which the Autobots and Decepticons pretty roundly levelled central Chicago, all Transformers are on the run from a human race that doesn't want them any more. A crack CIA team is hunting them down, with the assistance of a different Transformer - so it seems they do want Transformers around. Except the ones that they don't want around. This evil Transformer is voiced by Robin of Sherwood's Mark Ryan, however, so I suppose if nothing else this film has that going for it.

Optimus is found, badly damaged and inactive, by inventor Cade Yeagher (Mark Wahlberg). We don't get any indication on what happened to Sam Witwicky (Shia Le Beouf), who headlined the last three films. Optimus doesn't even ask after him. I like to think Optimus transformed at the wrong time in the wrong way and somehow squished him. Once repaired, and put on the run by the CIA and the not-an-Autobot-or-Decepticon Transformer, he reunites with his surviving Autobot companions to fight back.

These Autobots consist of Bumblebee, still the only Transformer other than Megatron and Optimus that the general public can likely name, as well as a rotund cigar-chomping machine gunner voiced by John Goodman, a transforming samurai voiced by Ken Watanabe, and a green pseudo-Australian robot in a metal stockmans coat. I honestly don't understand these robots. I swear every successive sequel makes these robots a little more sillier. Why does a robot need a coat? Why is one of them a samurai? Why is one of them comically obese? They made a cartoon of this stuff for years and never felt the need to make their cast look so ridiculous or so lazily conceived.

The other hallmarks of a Michael Bay action flick are all there. There's probably a downloadable bingo card somewhere, where you can tick off the tropes one by one. A plot that makes no sense? Check. Plot twists the audience can see from a mile away? Check. Talented actors like Kelsey Grammer and Stanley Tucci taking a pay cheque while performing roles that are kilometres beneath them? Check. Excessive CGI? Too much slow motion? Mild racist caricatures? A skeezy male gaze leering over the sole female cast member? Check, and how. This film even includes a comedy bit with a character we're supposed to like showing off his laminated card quoting how under Texas law it's legal for him to have sex with a 17 year-old.

There are giant dinosaur robots in here too, but they come in late and add little of value. Nothing in this film adds much value. You get to see Hong Kong get levelled like Chicago was; I suppose that might have appeal to fans of mass carnage and destruction. You really don't get much else.

Transformers 5 is due in cinemas in 2016, because paying audiences refuse to learn.
Posted by Grant at 9:10 AM