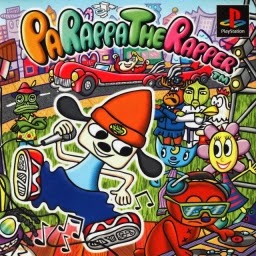 In 2014 Sony's PlayStation turns 20 years old. It was a revolutionary console, exploding the Nintendo vs. Sega paradigm that had dominated videogaming for a decade and its effects can still be felt today. PSX20 celebrates the 20th anniversary of Sony's Playstation videogames console by counting down my 20 favourite videogames for that platform. These aren't necessarily the best PSX games ever made, but they are the ones I liked and played the most. Today I'm highlighting #5: the 1996 game PaRappa the Rapper.

PaRappa the Rapper really stood out among its fellow PlayStation games. It wasn't a third-person action game for one thing, nor a car driving game, or a platformer. It was a rhythm-action game, in which the player had a press a combination of buttons in time with some music. The genre really peaked in the last generation of videogame consoles with titles like Guitar Hero and Rock Band. PaRappa may have lacked the guitar peripherals, but I actually enjoyed it a lot more.

The game also stood out because of its fairly unique visual aesthetic. It was in 3D, but its characters were all still in two-dimensions, like paper cutout figurines. They looked different as well: Sony hired popular graphic artist to design all of the characters and settings in his graffiti-like style. That move ensured the game had a lot of weird characters, which made it even more appealing. There's something about a rapping dog in a beanie taking instruction from a martial artist dojo master with an onion for a head that attracts one's attention.

The game was ultimately very simple and easy, but the various songs were wonderfully catchy and very replayable. The game was popular enough that it gained a sequel for the PS2 and a spin-off (the technical superior but slightly less catchy Un Jammer Lammy), as well as a brief TV cartoon - and of course the rhythm-action genre kind of got kicked off right here.

The wonderful cult appeal of PaRappa pretty much earns its place here. It's pretty easy to people who've played the game, simply by shouting "I've gotta believe!" and seeing who responds with a grin. It's that kind of a game.
Posted by Grant at 9:43 PM