Star Trek: The Next Generation: "The High Ground" 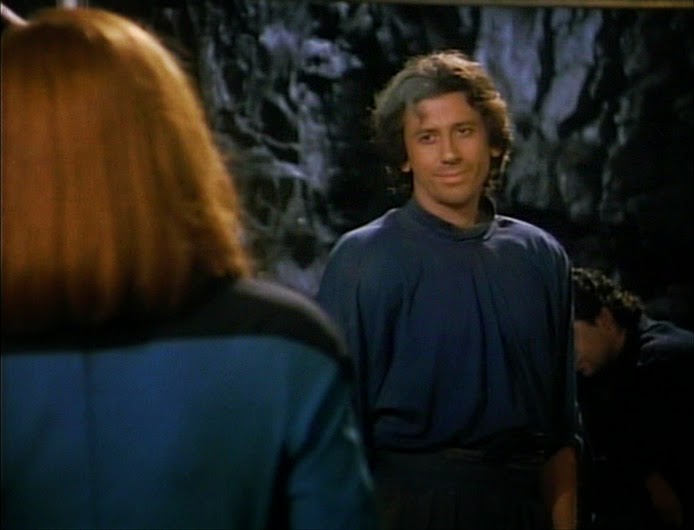 The Enterprise is dispatched to the non-aligned world of Rutia IV, which is wracked by ongoing attacks by a rogue terrorist faction. When Dr Crusher is kidnapped by the terrorist's leader, Kyril Finn, Captain Picard is unwillingly drawn into the planet's domestic politics.

While "The Hunted" gave us The Next Generation's take on Vietnam War veterans, rammed into a science fiction setting with all the subtlety of a screaming man with a two-by-four, so "The High Ground" gives us The Next Generation's take on terrorism. Its inspiration appears to be Northern Ireland and the IRA, and indeed Data references Ireland unifying in the year 2024 - that line alone got this episode banned in the UK and Ireland on the season's original broadcast run. It's abundantly clear that this episode pre-dates the World Trade Center attacks of 11 September 2001 - Data's explanation to Picard that terrorism clearly works in some instances would never make it past a TV network in today's cultural environment. To be honest even I found his bright-faced explanation of the merits of terrorist bombings to be a little inappropriate. The best argument Picard can up with to rebut him is that terrorism simply isn't very nice. I'm sure with some further thought the Captain could have come up with something better. He probably had an 'l'esprit d'escalier' moment in the middle of the night, waking up at three in the morning and summoning Data to his quarters to lecture him in the failings of the terrorist mind-set.

Like "The Hunted" this episode takes a pretty cynical view. We don't just see terrorists blowing stuff up and killing innocent people. We see the Rutian authorities rounding up civilians to interrogate - including children. It's a genuinely odd episode in this regard, since it doesn't really take a side. More than that, it comes very close to savagely indicting everyone involved in the conflict.

There is some neat science fiction around the edges: the terrorists are getting around using devices that transport them inter-dimensionally rather than by standard transporter methods. It gets them in and out undetected, but it's also slowly killing them as the process shifts their bodies more and more out of synch. They're used to great effect in the episode's standout sequence, as terrorists infiltrate the Enterprise and attempt to blow up its warp core.

It is also nice to see Gates McFadden get an episode to herself. Dr Crusher has rarely had the limelight since the series started, so it was a very welcome change. She's actually rather good as well, playing the part in a more understated fashion than she has in earlier episodes.

All up, though, the episode barely holds together. A lot of the problems come down to Richard Cox, who plays the terrorist leader Finn. For the episode to work he needs to be extremely charismatic and engaging. Cox plays him as slightly insincere and creepy. He's also clothed in the weirdest, most out of place blue shirt, as if he's about to date Susan Dey in L.A. Law rather than win freedom and independence for his people.

In the final analysis it's a no for me: there's good stuff in here, but it simply doesn't hold together enough. Hopefully they'll give Dr Crusher a better episode soon. This leaves Season 3 with seven good episodes out of 12, and a quality ratio of 58%.

A side comment: this episode is set on Rutia IV. "The Hunted" was set on Angosia III. They're nice, sensible science fictional names, but you have to question if these are their real names. We all live on the third planet of the Sol system now, but we call our planet Earth - not Sol III. Unless all of these planets are colonies, and the episodes tend to make that seem unlikely, then the Federation is presumably engaging in some kind of colonial renaming of other people's planets. Either that or the universal translation systems that allows everyone in Star Trek to understand each other actually translates the names of the planets, so people on Rutia IV hear "Blarquan" (or whatever their planet's actual name is) and Picard and his buddies hear "Rutia IV". These are the kind of questions that keep me awake at night.
Posted by Grant at 4:22 PM