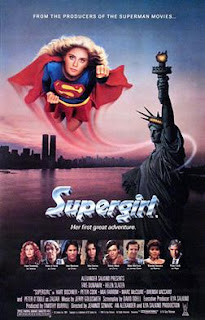 When the powerful omegahedron is lost, the people of Argo City are doomed to extinction within days if it cannot be recovered. Kara Zor-El (Helen Slater), the cousin of Superman, embarks on a quest to Earth to find and retrieve it. Unfortunately it has already been taken by the aspiring witch Selina (Faye Dunaway), who plans to use the omegahedron's immense power to take over the world.

After box office returns for Superman III resulted in disappointment, producers Ilya and Alexander Salkind took the opportunity to freshen up the five year-old Superman franchise with a new protagonist, a new angle and a fresh director. It is arguable that such a re-imagining was unnecessary. Superman remained a popular character generally, and the lower revenue from Superman III (US$60m domestically compared to US $108m for Superman II) was likely less to do with viewer fatigue and more with its 1983 release wedged between Return of the Jedi and the latest James Bond film.

Nonetheless the Salkinds moved ahead with a new chapter in the franchise, introducing Helen Slater as Supergirl and launching on her own big-screen adventure. It was not a success.

Supergirl is an odd sort of a film. It is tonally consistent like Superman III, and lacks the uneven quality of the first two films. That said, while it is consistent it is also easily the least enjoyable film of the four. There is a naive quality to the film, in which it seems almost wholly aimed at children rather than at a broad family audience. The acting is styled to match. Characters stand in dramatic poses and pronounce their dialogue with barely more than one dimension at a time. The story involves a villain using magic to get what she wants, which literally means waving around a magic wand to simply make things happen. Story logic is entirely unnecessary.

That ultimately makes Supergirl a bit of a nonsense. Since the villain's powers seem restricted only by imagination, there really is not a logic to how she can be fought or defeated. The film does build to an ending, but it's not an ending that makes a lick of sense. The film's strongest scenes are mostly in the early minutes, as a recently arrived Supergirl begins to discover her new-found Kryptonian powers. It also all fits rather neatly into the Superman movie continuity. Superman himself gets a mention (a Christopher Reeve cameo was scripted but never filmed), Jimmy Olsen (Marc McClure) turns up to romance Kara's roommate, and we even finally get a look at the dreaded Phantom Zone that imprisoned Zod and his cronies back in Superman II.

Jimmy's romance with the roommate, Lois Lane's little sister Lucy (Maureen Teefy) feels a bit off. She is still is high school; at this point he seems to have been a professional photographer for several years. I can't help but feel somebody needed to call the police.

Helen Slater is very appealing as Supergirl, giving her character a bright-eyed, credulous nature that actually works rather well. She is helped by a nice classic-style costume as well. Faye Dunaway is having a whale of a time over-acting, as if somebody told her that acting in a children's film meant that she could simply do what she wanted because it was not real acting anyway. Behind them there's a surprisingly talented supporting cast including Peter O'Toole, Mia Farrow (in the briefest of cameos) Peter Cook and Brenda Vaccaro. None of them get a great amount to do. None of them seem to be taking their roles seriously. At least Cook and Vaccaro seems to be having a good time. I swear O'Toole performs his entire role blind drunk.

It is nice to see a female-led superhero movie, and with a better script I could easily have seen this film spawning a couple of sequels. As it was a staggered and uneven release schedule (July in the UK, November in the USA), combined with a pretty savagely cut-down edit for the critical North American market (105 minutes instead of 124), Supergirl never really had much of a chance. Certainly there have been far worse films that launched a franchise. Instead it almost killed the big-screen Superman films stone dead. Warner Bros refused to distribute it, with those rights falling to Tri-Star Pictures. After it failed to earn a profit the Salkinds sold the film rights on to Cannon Films, who would take one final tilt at a Christopher Reeve Superman sequel. The Salkinds held on to the television rights, however, leading to the 1988 launch of Superboy.

For this viewing I decided to give the 138-minute director's cut a try. It basically expands scenes that were already in the 124-minute European cut, which of course makes all of the silly scenes of Faye Dunaway and Peter Cook even longer. In retrospect it would possibly a mistake.

I have a weird affection for Supergirl despite all of its faults. There's something rather earnest about it, as if director Jeannot Szwarc (Jaws 2, Somewhere in Time) really was giving one hundred per cent of his effort to make a crowd-pleasing summer blockbuster. He ultimately missed by half a mile, but goodness he gave it his best shot.
Posted by Grant at 11:25 PM