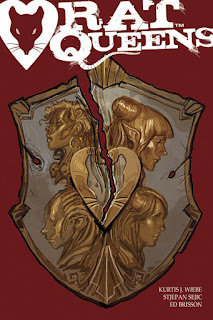 Rat Queens feels like a book that's been through the wars. Early acclaim was well earned with hilarious scripts and stunning artwork, then the artist resigned under a fairly unpleasant cloud, the replacement only stuck around for a couple of much-delayed issues, and even with a third artist - Tess Fowler - it seems the delays have yet to abate. I can't remember the last time an issue came out, but it feels like quite a while.

That has been fairly frustrating, because it has knocked the wind out of the book's sails somewhat. This 15th issue, which was released yesterday, marks the climax of the third story arc and represents pretty much the biggest ground-shift in the book's overall storyline since it started. Unlike many issues, this one isn't funny. Instead it feels like tragedy, and one that will have repercussions for many issues to come.

While it is well written, I am still not entirely sold on Tess Fowler's artwork. Following Roc Upchurch and Stepjan Sejic was always going to be a difficult task, but regardless her artwork seems to shift in quality from one panel to the next. It's mildly distracting, and gets in the way of the book hitting the heights that it used to regularly smash. It's still a great book, but I keep wanting it to be truly outstanding again. (4/5)

So I could not work out if this was going to be the last issue or not; it turns out it's not, and the book ends either next week or with issue #26 the week after. That leaves this issue to crank up the action and suspense as the combined cast of Batman sidekicks and associates to fend off rioting psychotic children across the world's major cities, Dick to have his first encounter with Azrael, and Harper to be given a chance at revenge at the woman who killed her mother. The art is solid and the panel layouts regularly quite striking. The plot rockets along. The key characters all get brief moments to shine. This is how superhero comic climaxes should be. (4/5)

Ray Fawkes and Ramon Baches take over from Patrick Gleason and Mick Gray, and so far it looks like a winning team. Robin is back fighting the Lu'un Darga cult that dominated this book's early issues, while his former partner Nobody is facing up against Damian's mother Talia al Ghul. The script is strong and the dialogue sharp, but the real standout here is Bachs' artwork. He has a very cute, exaggerated style that you'd normally see in an all-ages or kids book, but here he's using it to illustrate a ten year-old semi-murderous assassin boy, and the contrast makes it hilarious. I really hope this team sticks with the character for at least a few issues - if not longer. (4/5)

In the aftermath of last issue's perilous floods, Usagi finds himself tracking down a murderous kappa, a turtle-like river spirit from Japanese mythology. The action is beautifully composed and drawn, but in this case the story feels a little simplistic and weak. It's still entertaining, and still absolutely worth reading, but for a book that absolutely kills it month in and month out having an issue that's merely good feels like a strange sort of let-down. (3/5)
Posted by Grant at 5:07 PM