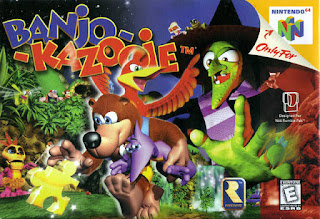 So let's talk about Rare. This British videogame developer was established in 1985 under the name Ultimate Play the Game by arcade game developers Chris and Tim Stamper. After developing some titles for ZX Spectrum home computer, the Stampers were shown Nintendo's Famicom console. Impressed by the technology and keen to develop for the console, the Ultimate team reverse-engineered the code - something Nintendo had maintained would be impossible - and sent a tech demo directly to Nintendo in Japan. So impressed was executive Minoru Arakawa that he signed Ultimate up - now using the studio name Rare - to develop games for the Famicom and Nintendo Entertainment System.

The Rare-Nintendo relationship solidified very quickly, beginning with a string of popular NES titles like R.C. Pro-Am, Snake Rattle and Roll and Battletoads. When Nintendo released the SNES console, Rare invested heavily in Silicon Graphics workstations, allowing them to render three-dimensional characters and then translate those graphics into two-dimensional sprites. It allowed them to simulate 3D graphics on a two-dimensional platform, and generated some of the best graphics the SNES ever had - notably on their Super Mario Bros clone Donkey Kong Country. It was during this SNES period that Nintendo started to invest heavily in Rare, first buying 25 and ultimately 49 per cent of the company.

One final game Rare developed for the SNES was Project Dream, an action-adventure game intended to push the console's graphical capabilities to the limit. Sadly it pushed the limit too far, and the decision was made to hold the game over for the upcoming Nintendo 64 console. Following the hugely successful launch release of Shigeru Miyamoto's Super Mario 64, the style of Project Dream was changed considerably and brought more in line with the cute, charming aesthetic of the Mario games. It was called Banjo Kazooie after its two controllable protagonists: a bear and a bird.

The most striking part of Banjo Kazooie in comparison to Super Mario 64 is its graphics. An extra few years of programming advances and some very talented work by Rare makes Banjo Kazooie a significantly prettier game to look at, although in terms of design it is questionable if it tops the iconic imagery of the Mario games. There is something a little too brashly cute about some of the characters in the game, which winds up making it less appealing while boasting more sophisticated imagery.

In terms of gameplay it is a relatively similar game, albeit with slightly more complex controls and moves and less emphasis on jumping from platform to platform. It is a very enjoyable game regardless - it is easy when lining it up against rival 3D platformers to criticise Banjo Kazooie, but that undersells its own strong merits. There are nine fairly expansive worlds to explore, and the player is empowered to work through missions and stages in almost any order they fancy. It has a few technical issues - notably a sometimes inconveniently placed camera - but all in all it's a challenging and entertaining all-ages platformer.

A sequel, Banjo Tooie, was released for the N64 in 2000. After Rare and Nintendo parted ways a few years later, it took until 2008 for a third title to emerge. For now the characters seem to be laying fallow. Some former Rare employees are launching a spiritual sequel, Yooka-Laylee, in late 2016.
Posted by Grant at 4:46 PM