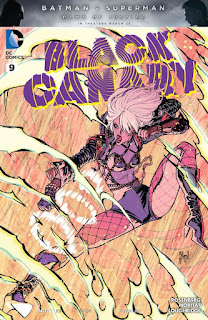 Black Canary is one of those promising DC Comics second-stringers who has a reasonably healthy fanbase, but doesn't seem able to sustain a book of her own for too long. There have been four volumes of Black Canary published since 1991. This current volume, now at issue #9, only needs to last another four months to be the longest-running one of the lot.

That said, it might struggle to get there with stunts like this. Last issue ended on a cliffhanger. This issue ignores it entirely, instead presenting a one-off fill-in issue with a different writer and artists. DC Comics are big on hitting their monthly schedule with each ongoing book. Personally I would prefer they just publish issues when they're ready and tell good stories.

This issue is not bad, but it does feel like an inconvenience. Matthew Rosenberg writes a story about the Black Canary band turning up to a rich teenager's birthday only to discover their audience is packed with Gotham City criminals and assassins. Moritat's artwork is distinctive and has a nice energetic look - I loved his work back on All-Star Western, and it's great to see him back with DC. While in isolation it is an entertaining enough one-shot, it's still a tremendous disappointment by virtue of not being what DC advertised. Hopefully they will get back on track next month. (3/5)

Under the cut: reviews of Doctor Who: The 8th Doctor, ODY-C and 3 Devils.

The Doctor and Josie arrive at their final destination: a deep space spa where aliens may rejuvenate themselves by transferring their consciousness into younger bodies. The problem is: what happens when those bodies start to develop personalities of their own? This is a concise and enjoyable final story for the miniseries, which provides an admittedly twee answer to why the Doctor and Josie were put on this trail in the first places but does expand upon and better define Josie's character at the same time. My only criticism is the one-adventure-per-issue format. Better to pick one storyline and stick with it and flesh it out for five issues. (3/5)

This One Thousand and One Nights inspired story arc concludes here with this book's typical blend of sex, violence, and surreal dream-like imagery. I continue to drink up every issue. This is a wonderfully literary and deeply magical sort of a comic book with a unique tone and look. Christian Ward is presenting some absolutely stunning panel layouts in this book. I haven't seen their like since J.H. Williams III was doing the art for Promethea. It's such a wonderfully gorgeous comic: not for everyone, but for those it hits it hits hard and then some. (5/5)

3 Devils feels wonderfully old-fashioned. It's a western/horror hybrid, with vampires, zombies and supernatural powers, all thrown into a story about outlaws, gypsies and highway robberies. It really feels like the sort of book DC Comics might have published in the mid-1980s, with the same sort of pacing, tone and panel layouts, Hampton's art is mostly rather good, although it does tend to get shaky in a few panels - particularly when it comes to his inking. Jeremy Mohler's colours are restrained and muted, which matches the story well. If you're looking for a horror book, or a western, and especially if you're looking for both at the same time, it looks like IDW has you covered for the next few months. (4/5)
Posted by Grant at 8:00 AM