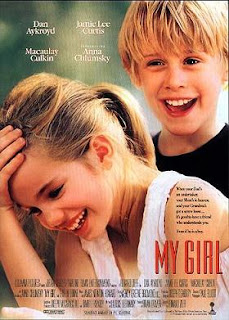 Vada Saltenfuss (Anna Chlumsky) is an 11 year-old on summer holidays in 1972. She lives with her father Harry (Dan Ackroyd) at the local funeral parlour, she spends a lot of time playing with her best friend Thomas J. (Macaulay Culkin), and harbours a crush for her school teacher Mr Bixler (Griffin Dunne). When Shelly DeVoto (Jamie Lee Curtis) arrives in a camper van to become the parlour's new make-up artist, Vada finds her life changing rapidly beneath her feet - with comedic and tragic consequences.

My Girl rode into cinemas in 1991 on the back of Macaulay Culkin's tremendous success in Home Alone the previous year. That perhaps skewed a lot of people's views on My Girl, since Culkin is a supporting character in the film and at the time a lot of moviegoers were not too enamoured with Culkin as a performer. I was not in that group. I went and saw My Girl because I liked Culkin and I liked Home Alone. It's been 25 years and I still like My Girl, in all of its deliberate, saccharine, and overly sentimental glory.

Sometimes you just like a film because it's enjoyable to watch. Others might not enjoy it, and they might have valid reasons to not do so. My Girl is a cloyingly sweet movie, with a precocious young woman wise beyond her years finding and losing love, discovering puberty, resolving long-festering emotional issues and facing the reality of death and change. There is not much in the film that does not feel like some kind of genre cliché. It is aggressively manipulative, using a funeral parlour to give it themes about death and loss and relying on the death of a child to give its third act some emotional power. It has a typically intrusive early 1990s musical score by James Newton Howard that positively screams at the audience to emote. It has a period setting so that it can fill the remaining silence with old-fashioned pop and rock music - although to its credit it is set in the early 1970s and not the 1960s as is the more common cliché.

On the other hand, the performances are pretty great. Anna Chlumsky is wonderful as Vada, playing a wide range of emotions in believable and effective ways. Dan Ackroyd demonstrates once again a gift for both comedy and drama - he remains one of the USA's most under-utilised actors. Jamie Lee Curtis is highly appealing and warm as Shelly. Macaulay Culkin, while not the most talented of child actors, does visibly play a different part to Home Alone's Kevin McAllister. He is not an outstanding performer, but his character works, and certainly as an actor he consistently improves as he gets older. He's great in Party Monster.

The acting lifts this movie. It takes stereotypes and makes them feel a little more realistic. They earn the audience's engagement in a way in which the screenplay and Howard Zieff's direction do not. I don't think it's an exaggeration to claim they save the movie. It's a comfort food sort of a film, but sometimes something warm, fluffy and sentimental is precisely what you feel like watching.
Posted by Grant at 7:37 AM